Just a very quick update to show my first efforts at painting soldiers for Frostgrave. This first guy was made up solely from parts from the Frostgrave Soldiers boxed set. The only change I made was to take him off his original base and put him on some textured plasticard. 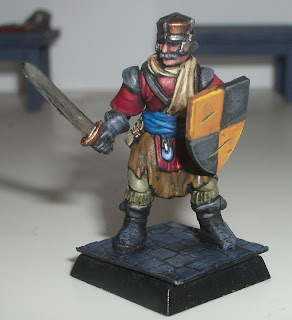 This lady has had her legs repositioned very slightly to help her aim her crossbow better. I used a female head from Statuesque Miniatures and a bit of stone from the garden. Otherwise, that's it. I'll put a bit more highlighting on her face and perhaps something on the base under the rock. 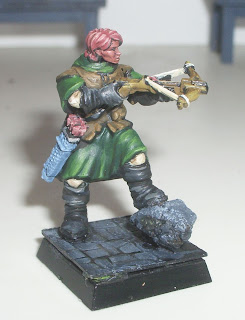 I'm reasonably pleased with the Frostgrave Soldiers. They're a bit smaller than many fantasy lines, and the detail isn't terribly crisp. But they certainly do what they're made for and look quite acceptable painted up. In particular, their heavy clothes and slightly shorter build make them good as female models. All you have to do is put a different head on them.