Vampire Sniper (and some random thoughts about blister packs)

This week's random person from the bitz box is some kind of vampire marksman (well, markswoman). I just sat down with a load of old bits and stuck them together until something interesting happened.
The model's upper body uses a dark elf corsair chest and cloak, with an enormous jezzail-type gun from the Adeptus Mechanicus skitarri, and a head from one of the Age of Sigmar Stormcast Eternals. The lower body was made from scratch.
Here's the start of the lower body: a piece of sprue pinned to the base at a suitable angle. 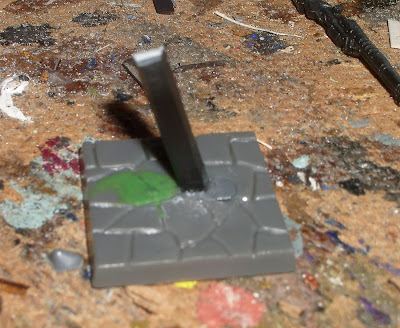 Here, I've added some Das clay around the sprue to make the rough shape of the skirt. I wanted it to follow the direction of the cloak and the jezzail. Once the clay is dry, I painted it with thinned-down PVA glue for a bit of extra solidity. 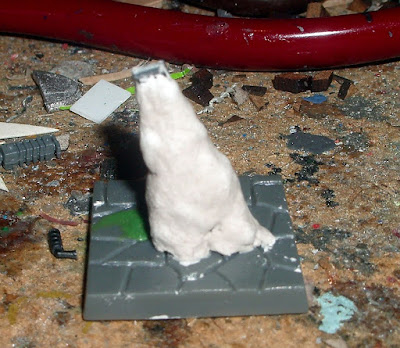 And here it is with green stuff wrapped around it and pulled into folds, next to the upper body. I sculpted a foot but later redid it to be a boot. 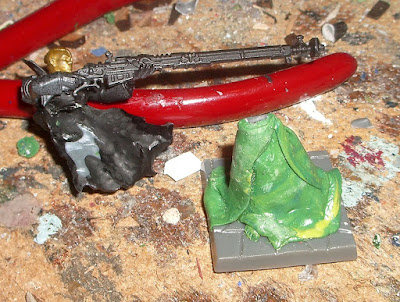 Then I stuck the two halves together and added paint! A dark, vampirish scheme seemed right. 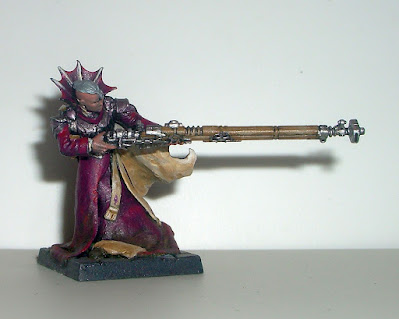 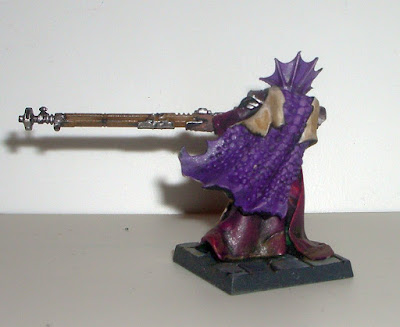 After a close call with the local vampire-hunters, the Lady Louisa needed for an easier way to feed off human life-force. The traditional method of neck-biting was too risky, but her considerable alchemical skills enabled her to develop an enchanted rifle that would steal the vitality of each victim it killed. Now she works as a sniper for hire. Living in the shadows has never been more profitable. 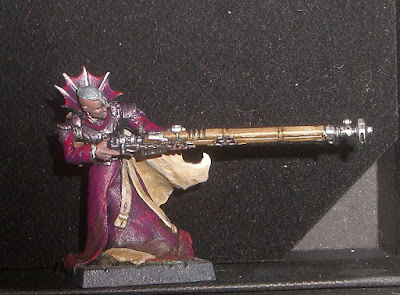 *
Over the last year or so, it's been possible to buy individual models for the skirmish game Carnevale from TT Combat's website. Human-sized models tend to be between £5 and £8, which is a decent price. This week, TT Combat proposed stopping this, and making the models available in groups, costing £15 or so. This got me thinking about models and the way I buy them.
A lot of this hobby is nostalgia. There's the pleasure of building and painting a model well, the sense of escapism that you get from the hobby, and the nostalgia for making little armies when I was at school. We used to build up small armies, paint them terribly, and then play battles with a very limited grasp on the rules. Once a month, we'd read the new White Dwarf and see what brightly-painted miniatures had come out for the three armies that GW seemed to care about.
I also have considerable nostalgia for the experience of buying miniatures as a kid. You'd pick through great rows of dangling blister packs and fork out £5 or so, often for some random thing that happened to look good (back in the days, there weren't any army lists). I bought two zoats and a genestealer patriarch that way. They were impulse purchases, and they rocked. 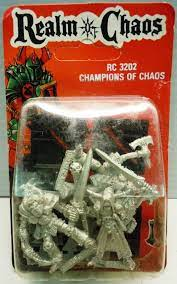 It's very hard to do that now. Most GW character models are at least £15 each (usually more) and rank and file models of almost all systems come in boxes for £20 or so. If you want to buy some random cheap thing that just looks cool, you've usually got to look on ebay, which is much less fun than going to the local model shop.
Is there a point to this rambling? Not really, just that I miss that sense of wandering to the shops with a bit of pocket money, to purchase some interesting monster or space explorer. Last month, I found a plastic bag marked "£6" at the local shop. It contained two metal robots. I've no idea who the manufacturer is. I bought them anyway, and felt very pleased with myself. One day I might even paint them!
Posted by Toby at 10:05

I fear the days of ‘random and cheap’ on eBay are gone, although admittedly it has been a while since I’ve been up at one in the morning sorting the miniatures category by ‘ending soonest’...

I miss the days of having hobby shops nearby that would have a box of random loose minis and bits to sift through..,

True - I remember the Cardiff GW having a sale of random metal bits, and rooting through all kinds of stuff. Wow, I just used "GW" and "Sale" in the sale sentence!

(and I meant to say "same sentence")

The sniper looks great! And thanks for sharing your trip down memory lane. I also miss the randomness of oldhammer blisters. The closest I’ve gotten is at conventions where people just have random minis for sale. I did find a shop that sells second hand minis recently. Excited to go back and spend more time looking though them soon.