This week I've been painting another of the Mantic terraincrate models, a horse and cart. This was made of the same rubbery plastic as the stalls and, while nowhere near as warped, was slightly out of shape. I made a small base for the horse out of plasticard and glued its feet to the base, which got rid of some slight bendiness in the legs. The poles at the front of the cart were a bit bent too, but I was able to straighten them out with hot water.

There's not much to say about the painting: I did the horse in a reddish colour to avoid it all just being brown, and went for a vaguely shire-horse look. It's not terribly exciting, but it's functional and will be useful as either an objective piece or some more cover. 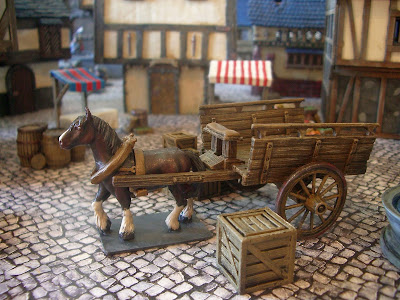 The next bit of terrain is big, but was quite easy to make. It's a three-storey house I found on ebay, by Krysoff Designs and made of laser-cut MDF. It came painted, in that the outside walls were sprayed off-white and the timbering was sprayed brown. Also, the roof tiles (which are greyboard) came in strips. All of these were considerable time-savers when I was putting the thing together.

It assembled pretty easily, overall. I did a bit of extra shading and weathering on the wood, and I cut the ends off some of the tiles to make them look less even and more decrepit. I felt that the roof was a little bit bland, so I made a dormer window and the bases of two chimneys from card and scraps of MDF cut from the sprues. Cue awful WIP picture: 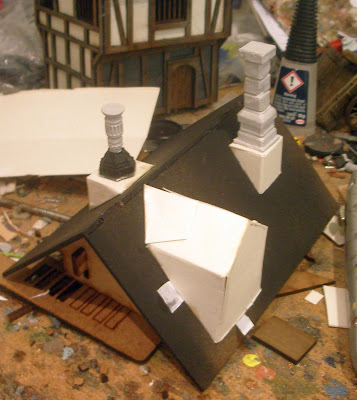 The chimneys were made from a pillar and the bottom half of a font-type object, both of which were from Nolzur's Marvellous Miniatures. They have a nice ornate Tudor feel. I also added some detailing in the form of shields and a sword to make it feel a bit more Warhammery, and I made door handles from the horns on an old chaos warrior's helmet, along with plasticard hinges. 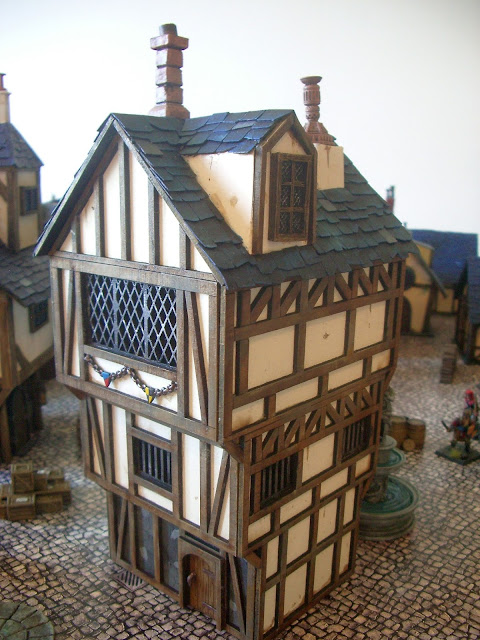 Overall, I'd recommend this kit. It went together reasonably well, it's big and well-designed in terms of looks, and it was easy to customise. The pre-painting and the pre-cut roof tiles were a huge help as well. The three storeys add some height to the town, and there are floors, so people can shoot out the window if necessary. What more could you want in a home? 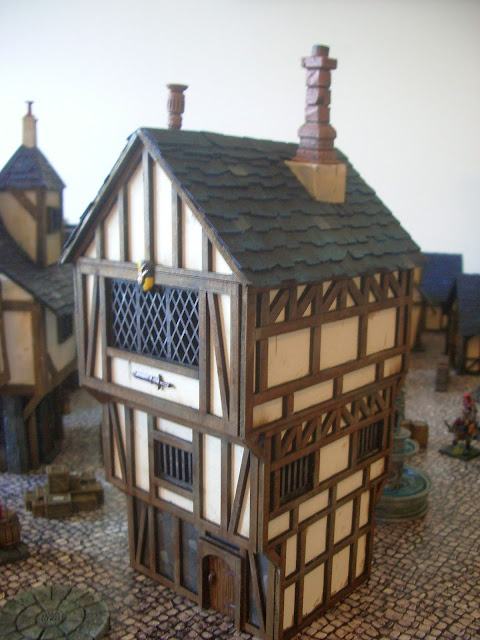 Wow! Nice find on the house. Love that you customized it with a little conversion work and some extra paint. Will make any town feel more lived in. The cart is also nice and handy. I’ve always had to use a lego horse and buggy for d&d games past. Lol

The house is pretty impressive. Your improvements made it look gorgeous!