Of all the aspects of Warhammer 40,000, my least favourite has to be the Space Marines. This is a bit of a problem, as 40k is basically "Space Marines vs some other people". But the marines are really unappealing.

They're boring. They all look very similar, and have about one personality per chapter. Some of the background fluff is like a ten-year-old boy's idea of a tough guy: they're really big, they don't like girls and they can spit acid. Goodness only knows what their wee does. And the obsession with making them larger and larger is just plain odd.

Anyhow, I happened to have a small group of marines that I bought a while ago, because they were quite decent miniatures. Also, like Teletubbies, they would all have differently-coloured armour. I thought I'd give them a go.

First up, we've got a very old librarian miniature (who on earth thought that "librarian" was cooler than "psychic"?). My friend Owen gave him to me: I think he's Rogue Trader material. I painted him up in a fairly standard way, and found that he was quite fun and easy to paint. There's nothing much to say about him, except that, unusually, I gave him a pinker lower lip, just to make his features a bit more pronounced. Oh, and that he looks like that man who chopped that other man's willy off in A Game of Thrones. 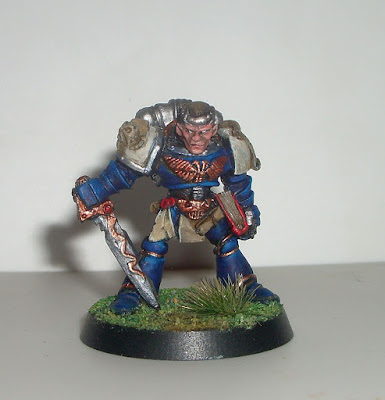 The second marine is an apothecary. I painted him in the usual white colours, shading up from bone. It took bloody ages, but I think it came out alright. There was a lot of fiddly detail on this model, and painting him with a white undercoat made it hard to outline all the pipes and flasks. I might try to lighten the colour a bit: he looks slightly dirty. 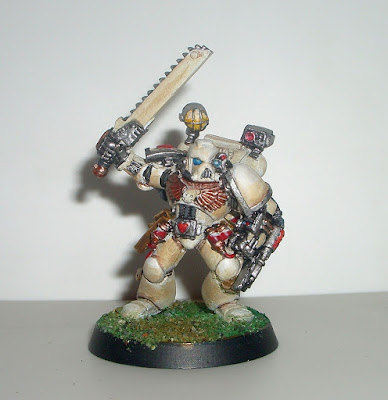 The third model is a techmarine. I like techmarines, as they have lots of cool detail and odd machinery. This guy came with a backpack that had a huge robot arm sticking out the side of it. While this was good, it really detracted from the movement and pose of the model, so I replaced it with a regular backpack. I mixed some grey into his skin, to give the impression that he's virtually a robot. 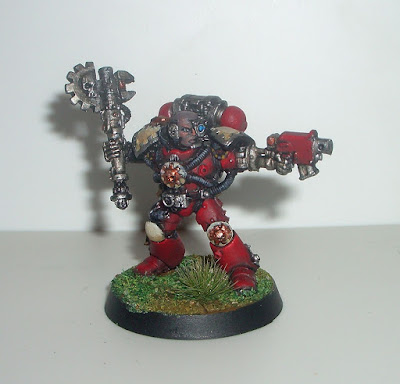 And that's all for now!

It's nice marine models, especially like the tech marine. I've never really gotten the whole marine fluff (just like your thoughts, they're bland) and have read lots of different codex books.

I've just finished 'Helsreach', searched for 'best 40k battle novels' in order to educate myself a bit on the fluff. It's about a space marine and it added so much... Suddently space marines have personalities, disagreements, doubts. It was really cool.

Thanks! I used to write for GW - I wrote the obscure Imperial Guard novel Straken - and I'm impressed by the writers who can flesh out the Space Marines. It'd be interesting to see them done well, rather than just "big space soldiers". Maybe I should give Helsreach a look.