I've been working on the hovercraft/submarine/skimmer machine from last post. The first and most major addition was a pair of mechanical arms scavenged off the "Galvanic Servohaulers" terrain kit. 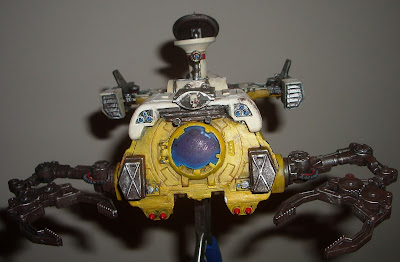 I decided to paint the large circular bits on the Devilfish's doors as portholes. However, that meant that I'd be using "painted-on" glass as well as the transparent cockpit bits I'd had planned for the turret. After conferring with the chaps, I decided that this wasn't really viable, and removed the turret altogether. Instead, I added a hatch made from parts of an old bunker model, and a funnel that had originally been the base of a street-light from a WW2 scenery set. The periscope was a chimney-pipe from an old Empire house, with a light stuck to the front. They go back to the nautical theme quite nicely.

(The pliers are in lieu of a proper flying stand, so I can hold it up without my fat fingers getting into the picture.) 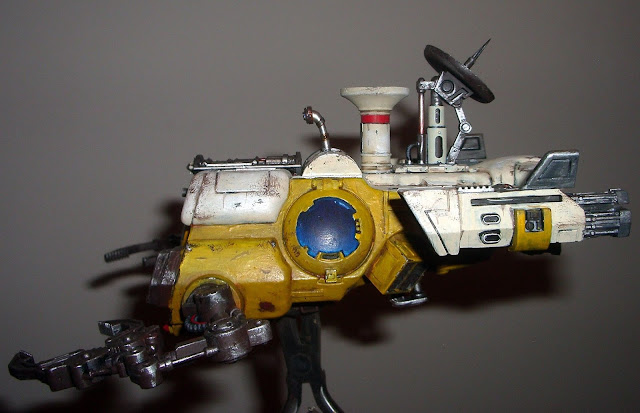 The next thing was to actually paint this machine. Yellow for the hull seemed right, given the submersible theme, and white for the upper parts worked for a boat. I made sure both were dirty and heavily chipped: this feels right for an industrial vessel and hides the rather ropey state of the basic model. 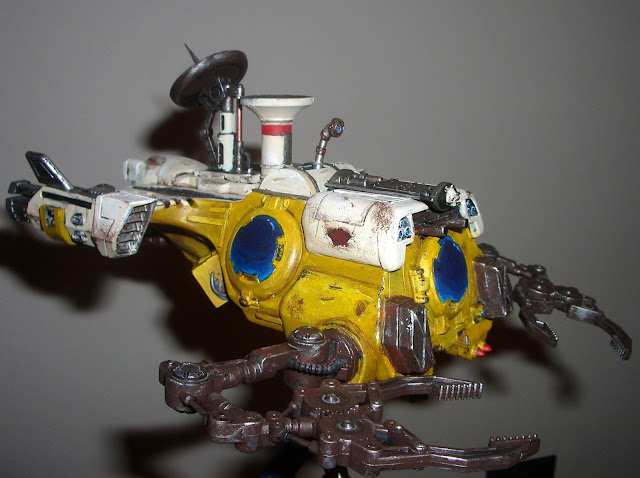 So there it is! It's been a fun project - although this thing still needs a base - and once again I've made something whose function I've no real idea about. I expect it hovers out in the badlands, collecting scrap for repair back at the township. Something like that. 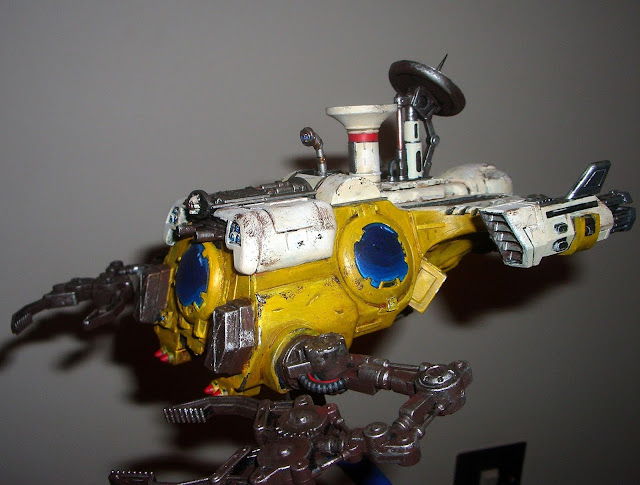 I think it would make a rather good objective, or an unusual terrain piece. Perhaps I ought to write some rules for this vehicle. Or maybe it needs a crew...

Brilliant conversion on the vehicle!

It looks fantastic Toby! Your kitbashing skills are great. The painting really tied it all together. The glass effect looks really nice too.

Building just for the fun of it is a great way to get the imagination going I've found. It'll look great on the tabletop in any futuristic setting no doubt.

Thanks - high praise from the guy who made a spaceship from a nerf gun! I once heard that John Blanche just randomly builds stuff, without much of a plan when he starts, but I'm not sure whether that's a good thing... Anyway, next up is a horrible blob monster, which I suppose is the organic equivalent.