I've had an ancient, broken Tau Devilfish lying around for ages. I got it second-hand off Ebay, and didn't realise just how gunked-up with paint and glue it would be when I paid for it. I always expected to end up using it as a wreck.

For some reason, it occurred to me to make a sort of hovering tug, the 40k equivalent of this kind of picture: 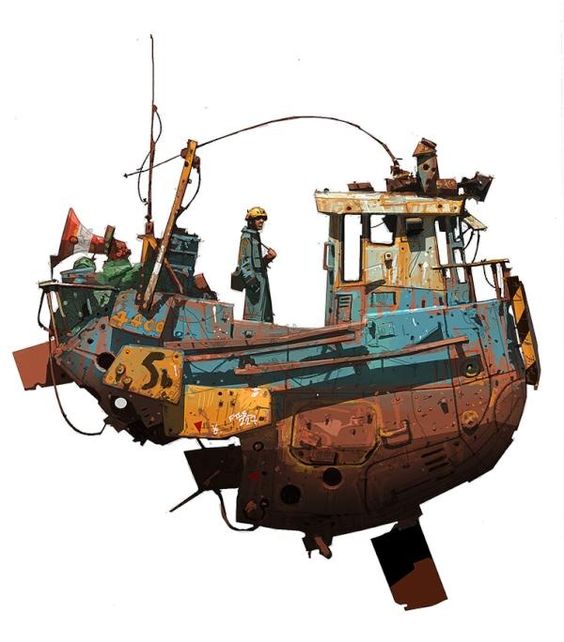 The battered, rusty style would enable me to get away with the mucky finish on the Devilfish, which, turned upside-down, would make a decent hull.

To further get away from the Devilfish's shape, and to get the clumsy, bulky look of a tug or coaster, I turned the hull around, so my vehicle would have a big, square bows and a tapering rear. I attached two Tau engines from a Piranha to the place where the drones would go, and got to work adding as much extra detail as I could to make it into something new.

The cockpit was left over from a steampunk Stormraven conversion that I made a while ago. Most of the other parts were odds and ends from the bits box, as well as plasticard cut down to fill up holes and break up areas that looked too smooth and high-tech. I was particularly pleased with the under-hull thrusters/vents, which are a pair of resin aircon units bought from a miniatures show recently.

I tried to keep some nautical concepts, taken from small ships and submarines, to suggest its function. The bulging Tau doors made good portholes. The satellite dish and exhausts are, hopefully, suggestive of a funnel. If this all seems very elaborate, that's because I was stuck in a very boring work meeting and had the chance to plan it all out on the back of an agenda: 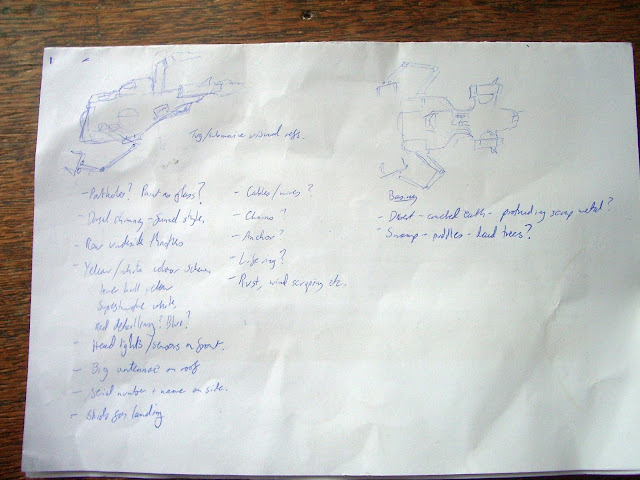 Next time: final touches and painting!

This sounds very interesting indeed Toby! Can't wait to see how it progresses. Re the paint, you could always strip it back to bare plastic with the right stuff. Might make it easier to bring it all together?

Either way, I think it's going to look great. That illo you're using for inspiration is pretty cool. I'd never considered turning the Tau ship upside down. *sits on edge of seat in anticipation*

Allready curious about the result!

I’m going to start commissioning you to build me models to paint Toby, great imagination as always!

Cheers guys. The underside of a Tau ship is surprisingly detailed! Well, I've had to make some alterations to the cockpit, but it's looking good. I've added a pair of very large arms, and started on the painting. It's going to look like a weird mixture of submarine and crab...