Last week, I tidied my desk. Most of this involved clipping parts out of sprues and putting them into little plastic pots from Ikea: tedious, but strangely satisfying. Under the heap of parts, I found my old set of modelling tools in their sinister little roll.


I got to work on a conversion that I'd had in mind for ages. A while ago, I'd purchased a box of broken Privateer Press models, which included a headless thing which I think was originally a bison with a saddle. Armoured legs were sculpted onto the saddle.

I used the head of an ancient (and not very good) orc boar, and blended it to the body with quite a lot of green stuff. I used a chaos knight's arms and torso, and added a Brettonian head for a suitably enormous helmet. 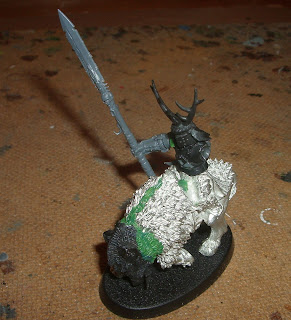 A few other bits were added, a base sculpted from a lump of clay, and then it was time to paint this chap. It took ages - every time I'd finished, I found something new. But I have to say that the result is decent. The bright colours and weird concept go together quite well, I think: he could work in either Mordheim or Frostgrave.


The mysterious knights of the ancient Order Of The Pork Rampant are known for riding enormous mutant pigs instead of steeds. While they are regarded as eccentric by their comrades, and are often the butt of sausage-related jokes, there can be no doubting their prowess in battle. Many a hungry orc, thinking himself about to get a cheap luncheon, has been horribly gored by the grunting warpigs of the Order. Here we see the bold knight Sir Plusse de Requirements, looking for glory while his steed looks for truffles. 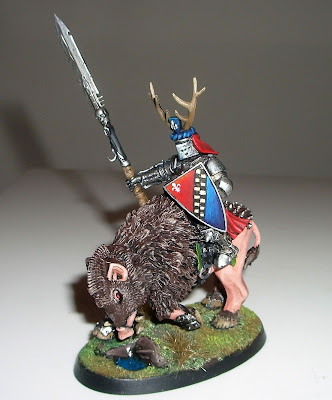 Thanks, it was a lot of fun to make!