There comes a point in life where you stop and try to take stock. Where am I going? How did I get here? And why have I got so many Sisters of Battle tanks?

I've always liked the Sisters of Battle. They look cooler than Space Marines: they're less chunky and their armour has a sleek, antiquated style that fits the medieval feel of 40k better than brightly-coloured slabs of steel. They've got a bizarre concept and some wacky special rules. And of course they're the underdogs. For the last 10 years, the question has lingered of whether they are going to be "squatted" - ie, written out of the game. The background fluff has made them the standard victims of pretty much any other species, often in stupid circumstances. And weird people on the internet hate the possibility of being beaten by an army of girls, even little lead ones. 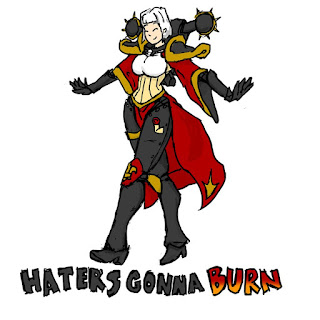 But most of all, the Sisters of Battle are 40k at its purest. Yes, I realise that the marines are more "iconic", so much so that there's a statue of one outside GW HQ (although there are Sisters in Rogue Trader, too). But the 40k world is basically the medieval church in space, and the Sisters are the sworn defenders of that church. In a setting based around war, piety and craziness, Joan of Arc is king. Well, queen.

What this means is that it makes "sense" for the Sisters to have the most absurd, over the top vehicles in the game. They should look like lumps of cathedral on tracks. In fact, I'd go one further and say that the aspects of the Sisters that I don't like are the recent, booby-lady elements: the Repentia and, to an extent, the Pentient Engine. So let's have a look in the motor pool of the Order of St Triniana and see what I've got. 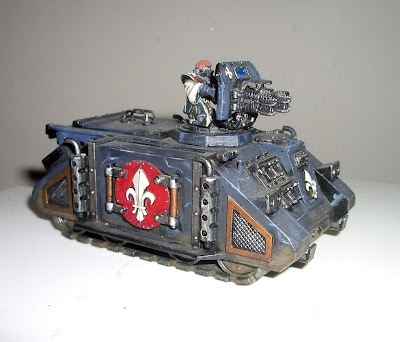 First up is this early-model Immolator. Built on an old Rhino chassis and equipped with twin heavy flamers, it's great for quick trips into town and then for burning town to the ground when it displeaseth thee. 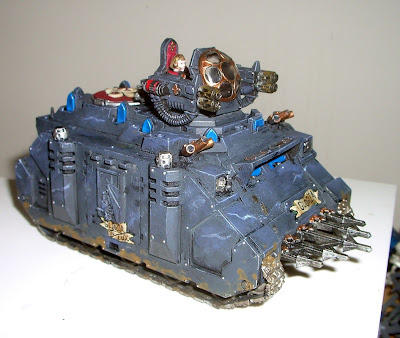 This is a standard-model late-variant Immolator, armed with twin multi-meltas. I finished this one today, although I've had the parts knocking around for ages. The only conversion I've made was to sculpt scrolls on the front and door, because I couldn't remove the doors from the second-hand Rhino on which I based the model and hence couldn't use the doors with Sisters iconography. Other than that, it's "normal". 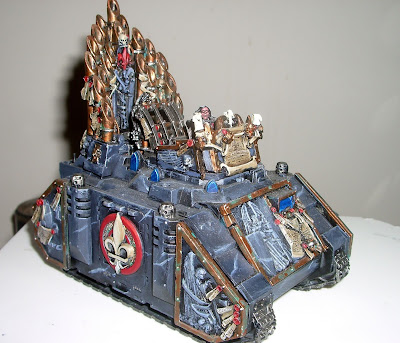 And here is an Exorcist. This, incredibly, is the "standard" variant, complete with pulpit, keyboard and rocket-launching pipe organ. It must be one of the silliest kits to ever grace the 41st millenium. It probably weighs about a kilo, being lead on top of a plastic Rhino. My favourite detail, among endless other details, is that the pilot operating the keyboard has her eyes closed, presumably because she is so into playing Bach's Tocata and Fugue that she isn't bothering to check where the rockets are going. 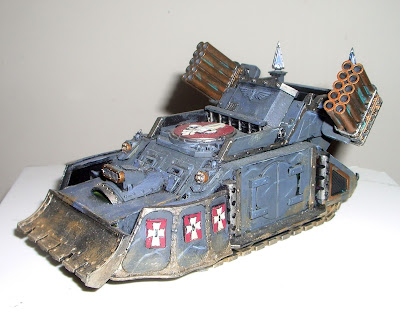 For once, the conversion I made is less absurd than the standard model. This Exorcist is equipped with launchers taken from a Dust Tactics walker. The front was extended with parts from an old steam tank, and the back was built up with scenery bits. As with all the others, the paint scheme is meant to suggest marble, although I'm not sure I was terribly successful there. 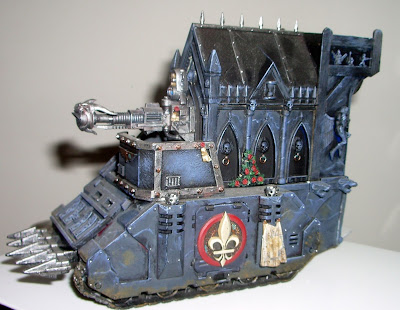 And as for this... well, I suppose it's an Exorcist too, since the Sisters only have a few sorts of tank. It's essentially a mausoleum from the Garden of Morr on top of a Rhino, with extra bits and pieces.It was partly inspired by a sculpture by Kris Kuksi, but just as much by whatever I could throw together. I have doubts as to its military effectiveness, but I bet the Sisters like all the twiddly bits. 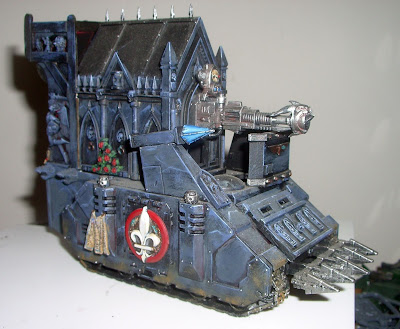