So, after that unsatisfying interlude, let's move on to something else. A while back, I discovered that people sell broken miniatures very cheaply. And often, their definition of "broken" is very wide.

I picked up four old ork commando miniatures for £4 on ebay. They are from the period just before the orks were redesigned to be hulking, ape-like creatures with bandy legs, and are noticably smaller than the modern sort. Which is handy, since Shadow War Armageddon allows the orks to take "yoofs", who are the equivalent of "juves" in Necromunda: new recruits lacking in experience.

These two guys are the first two commandos. 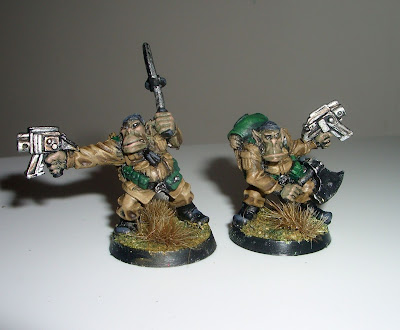 They've still got the cartoon British WW2 look, perhaps even more so than their modern counterparts. I suppose they're not the most sophisticated miniatures, but the paint went on them very easily. They seemed to come together really simply. I enjoy painting the skintones like this, too: adding pink to the mix makes it feel more like actual skin.

Best of all, though, is the rear view (so to speak). The orks have rucksacks, pouches and coils of rope, as you'd expect from commandos, but look at this! They've got Swiss army knives! How cool is that? 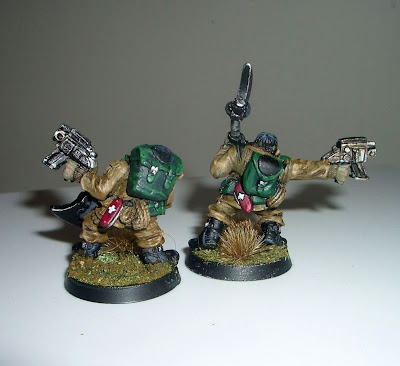 I think that's an excellent touch. There's real charm to that. Sometimes it feels that, as models become ever more slick, full of detail and precision - and bigger - it's this sort of quirkiness that appeals to me. I find this kind of detail endlessly more appealing than rows of identical soldiers, as similar as they are elite. It's fun.