Gaze Upon My Orks And Despair!

The last two yoofs are finished for the ork commando force. These guys came as "broken", because their weapons had snapped off. I gave the one on the right a Roman soldier's sword to act as a commando dirk. He's probably the weakest sculpt of the four: I think the old moulding methods rather limited his movement. The other yoof's axe had broken off. Because every commando unit in an old war film has an explosives expert (or just a lunatic who likes things that go bang), I drilled a piece of dyed string into the handle of the axe and painted it as a stick of dynamite. 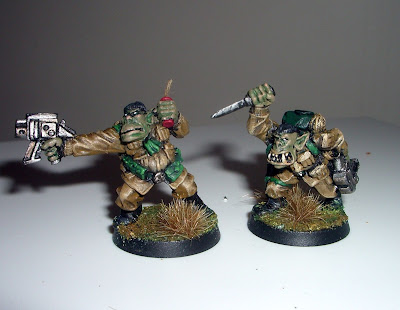 The unit now has ten members, and is ready for a bit of gorilla warfare!

Warlord games had a half-price sale, and I bought a couple of ruined houses sold for Bolt Action. The houses are Italieri kits and small, even by Warlord's standards. I assembled one and painted it in a quick, rough way for use as a generic ruin. I left off the sandbags and modern details, and cut away the top of the doorframe to make it look less tiny. To be honest, if I had bought these things at full price (£16 each!) I'd be feeling cheated.

At any rate, it can't be that terrible, because Orke Waaargate has taken up residence in it.

And finally, a bit of resin terrain from Spellcrow which I bought ages ago. I don't think all the bits were sent, but as with much Spellcrow stuff, it's a really nice, detailed sculpt.

Now, how will the orks perform in combat? Will the terrain be getting some use shortly? Wait and see.