This week, more of the undead have flocked to the Serene Republic of Venice, thirsting for blood and Conettos. First up, we have a "standard" vampire. 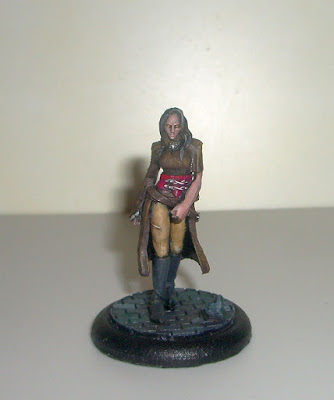 I really like the movement in this model, although I'm slightly puzzled as to why she's only got one sleeve. The miniature originally had the coat partly open, to reveal enormous cleavage. Now, I've no problem with Ingrid Pitt and all that, but if your principal weakness is in your chest, it seems foolish to give people a really good shot at it. So, I closed the coat up with a bit of green stuff, prude that I am.

It's hard to see, but her coat was painted with a stippling technique to suggest old, cracked leather. I like the technique, invisible as it is!

The next guy is a slightly drab thrall with a crossbow. He came with the Kickstarter. As with all these models, he's nice, but I've painted him in rather muted colours to show his low ranking in the vampiric hierarchy. Lucky him. 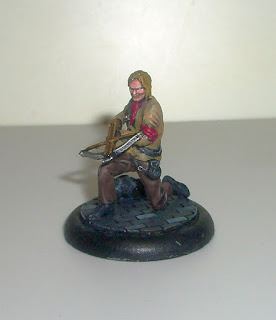 And finally, some terrain. For the first time in about six months, I went to the local gaming shop, where they have a lot of the Nolzur's Marvellous Miniatures models for Dungeons & Dragons. These are cheap and pretty decent, and the terrain they make is very nice. I bought, among other things, a very nice fountain. It had a few mould lines, and I had to cut off the trident of the man on top (Neptune?) because it was so bent, but overall I really like the model and think it will do well for both Frostgrave and Carnevale. 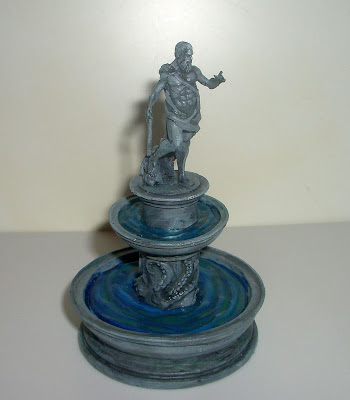 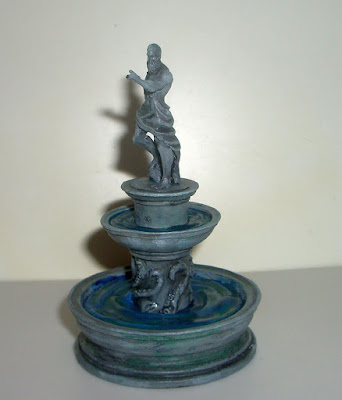 Great work as always Toby. I really like the feline grace / movement the sculpt of the first model implies. I haven't gotten around to painting either of these individuals from my set yet, the thrall with crossbow will be another useful addition giving you some ranged support.

I really must get some commissions out of the way so I can start painting up some of the doctors or maybe some of the gifted faction. I might convince my son to play some Carnevale this weekend!

Cheers! Whoever does the sculpting for Carnevale has done some excellent work. They're great miniatures. Two crossbow-wielding thralls should prove useful in a fight.

I really enjoyed the couple of games I've played. It's a good system - not too detailed but not too fiddly. Once the virus is sorted, I look forward to playing you again. I might even have a painted gang by then!