From time immemorial (ie about 1988), chaos spawn have been an important part of the Warhammer Chaos army, not least because they're a good way of using up all the bits you've got left over from other projects. A while back, I converted one of the strange creatures from the Killteam Rogue Trader box, and that reminded me of some old spawn conversions that I'd done a while ago, and which were gathering dust in a cardboard box when they could be raising hell on the battlefield.

I dug the conversions out, re-based them, and gave them a new coat of paint on the flesh. I more-or-less followed a tutorial that I found here: HERE. It's probably not the most exact method, but it produces a pleasingly disgusting, but not too rotten, effect. Here are the re-worked spawn. 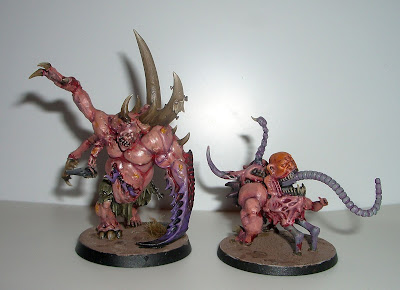 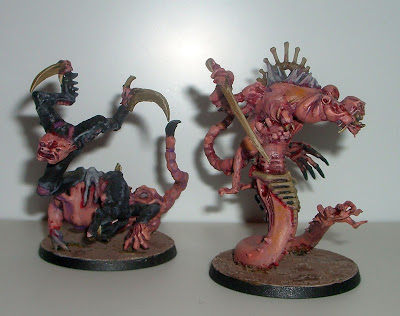 It's rather hard to explain what they are, but there are a lot of tyranid bits in there, along with some skaven parts. The overall effect is... lovely.

Here is a family photo. 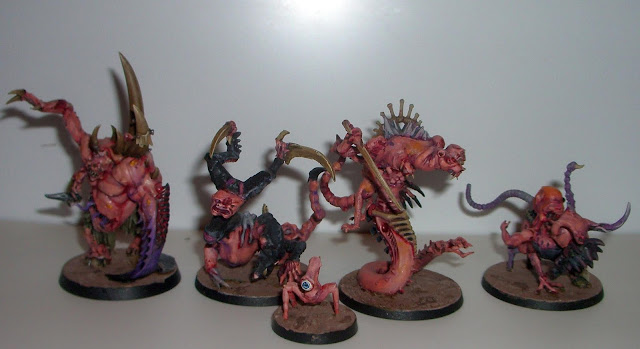 Anyway, I actually find them quite gross to look at, so the tutorial obviously worked. I think I'll paint something cartoony and nice next: a knight, maybe, or a wizard. The spawn are going back in their box. Ugh.
Posted by Toby at 07:16

Is it just me or does the first photo look like the eye-child from Garth Marenghi?