An Orc, A Troll, And Some Random Musings On This Blog

After the rather disgusting Chaos Spawn, I thought I'd paint something "nice": namely a war machine, an orc and a troll.

The orc is a very old metal orc who was in a battered state when I got him, missing his left arm and his weapon. I suspect that he originally was a bowman, but I made him a spear out of a paper clip covered in green stuff, and gave him a Frostgrave left arm with an ancient plastic shield. I really like these shields: the moon and the evil sun designs feel like classic Warhammer to me. 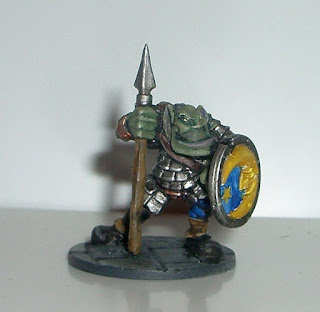 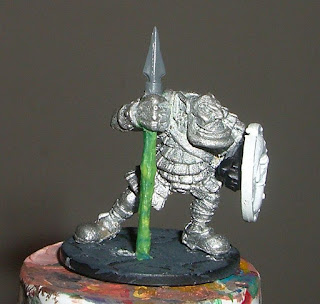 Like the nude orc that I made for the chaos warband, there's not a lot of detail on this model for the brush to "catch", especially on the face. Still, he was pleasant to make and the shield was really nice to paint. 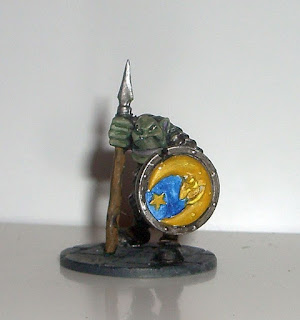 This is an old stone troll, from the "red period" of the early 1990s. I really like the design of Warhammer's trolls: they look menacing but also dopey and slightly comical. I went with a pretty standard colour scheme. I like using purple washes on models like this: it gives the impression of flesh rather than just rock. Likewise, I mixed a bit of pink into the highlights to suggest living skin, but I doubt it's very visible in this picture. 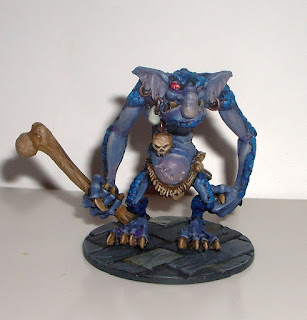 The war machine is a plastic Mantic trebuchet, originally made for their undead army. It had that cartoony look that's common to a lot of Mantic's stuff, which I don't really like. The only converting I did was to cut away all the skulls and spikes, and to put three shields on the cross-piece to cover up the hacking. The yellow-and-black quartered design has become quite common on my more heroic Frostgrave models: maybe it's the heraldry of the local lord. 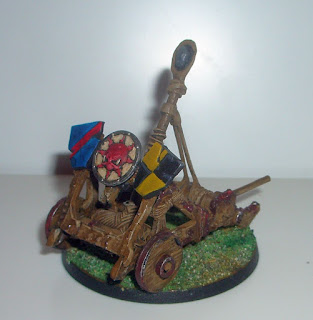 Anyway, that's enough of that for now. I started this blog to chart my efforts to get better at painting, and to improve. I think, overall, I've done so: I'm very pleased with some of the models that I've made, and I think that the cyberpunk eldar, the ork commandos and some of the Frostgrave people are some of the best miniatures I've ever converted and painted.

However, it might be time to take stock a bit. I don't think I'm improving much as a painter now: I suspect that I've got as good as I can do, and that things like complex freehand will always be beyond me. Likewise, I'm not inclined to splash out for tools like airbrushes that I doubt I'll use all that often, or all that well. So I might have plateaued somewhat.

That feeling might just be because I've been feeling a bit down, recently, and I'm certainly not inclined to throw in the towel. This blog gets very few hits at all, but it's been fun to do. I have ended up with a lot of nice miniatures, some of which have even seen the light of day on the battlefield.

However, a lot of them haven't. So, I've ordered two sets of solo rules: Perilous Dark for Frostgrave, and Hardwired, a set of rather odd-looking skirmish cyberpunk rules. Frostgrave is reliably good, and I've got no idea how Hardwired will work out, but it looks interesting. So we'll see how it pans out. Watch this space.
Posted by Toby at 10:46

Cracking conversion work on the Orc and paintwork on both it and the Troll!

Your paintwork is indeed improving greatly!

As long as you're enjoying painting and posting pics online of your progress don't worry too much about hits as my experience with blogging has been a bit hit and miss where stuff that I've really enjoyed working on gets no interest whilst stuff that I'm a bit more meh about gets lots.

I personally blog as part of my hobby and as a record of how I'm getting on so whilst hits, comments and stuff are nice, it's also really rewarding to look back through old posts and see what I've done and how my painting has progressed!

I'll be interested to see how you get on with Frostgrave as I have a copy but not really done anything with it. I've found that with solo gaming, you tend to get a more reliable and less power sort of gamer as your opponent and have played quite a few solo games down the years that have been far more fun than anything I've experienced with an actual opponent!

I've actually had a bit of a hobby slump of late with lots of ideas but no time or motivation to do much with them so reading your blog has been a bit of an inspiration for me as I've really enjoyed perusing your posts, even if I often forget to comment on them!

Thanks - I'm glad to hear that my painting's improving. I suppose it's hard to tell when you're closer to it, so to speak, but I've done some stuff in the past year especially that I really like. I don't think there's any logic to how many hits a post gets - not as far as I can see, anyhow.

I did some solo missions from the Frostgrave Folio (as in just me, no other players) and I thought it worked pretty well. I've also played a couple of games with friends and, while setting up the warband and choosing spells is a bit awkward, the game itself flows really well.

I'm very pleased to see that you find the blog inspiring! I think your work is terrific, especially the sculpting, so do keep at it! If ever you'd like to draw more pictures of Space Captain Smith, feel free!