This week, I've started on the "standard" chaos marines from the Shadowspear boxed set. I managed to get two sets of these, which means that I'll have ten marines with ranged weapons and ten fitted out for close combat, which I might use as berserkers of Khorne (without the silly hats).

I didn't want to paint them a colour that would tie them into a particular chaos god, or do anything especially bright on the armour. That really left black and white and, seeing that I've already done one squad in white, these guys got black armour. In fact, they look quite a lot like the Black Legion, although they're not supposed to be from there.

Anyhow, here they are. The chaingunner from the last post is a bit small, but he fits in pretty well. 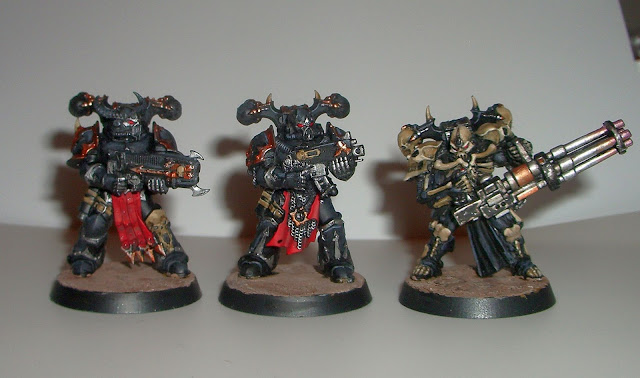 If anything, they look a tad under-painted, as the highlights on the black armour don't come out well on this camera. The models are really cool, even if they're single-pose, and the proportions are somehow miles better than the old models, while not being much bigger. I like them. 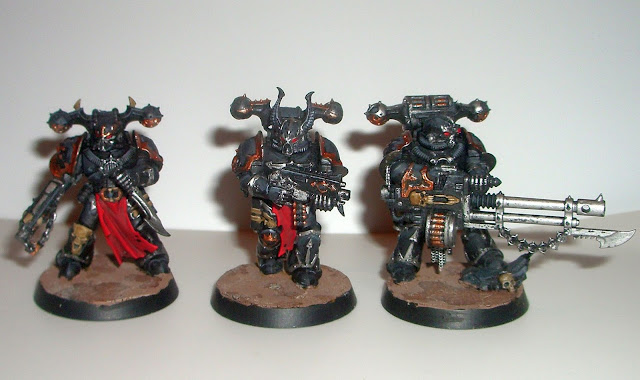 These guys look great. I really need to paint my ones soon. You’re right; the new aesthetic on these chaos Marines is much better.

Thanks! It's amazing how much they models have improved. They finally look as dangerous as they ought to!