Chaos Chosen and the Start of a Sorcerer

This week, I got to work on a squad of Chosen chaos space marines. Chosen are elite CSM: they have more attacks and more options for equipment. They are, apparently, superhuman and nasty even by comparison to their own comrades, which is saying something. They're also very fancy.

The models I had came from an old boxed set called Dark Vengeance (as opposed to Happy Vengeance and Cheerful Revenge). They were some of the first "new-style" CSM, and are better-proportioned than the older miniatures. They're one-pose and extremely detailed.

Somehow or other, I ended up with four of the basic Chosen bloke, who has a bolter. I also painted up a guy with a power fist and a pistol (maybe a champion?) and a guy with a big stick that's probably a power mace. I think he'd make quite a good Dark Acolyte (that's a renegade chaplain), because he's got his hat off and his weapon could make a decent crozius arcanum.

So, here are the first three Chosen: 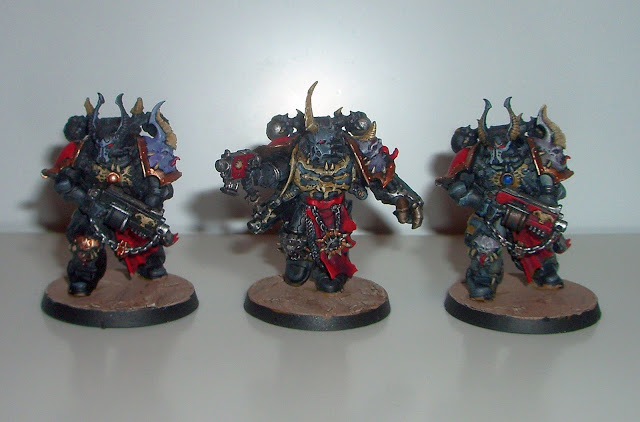 And here are the second three. Obviously, the bolter-armed models are the same, and I've given them small variations to make them a bit different, whilst staying in the same colour scheme. 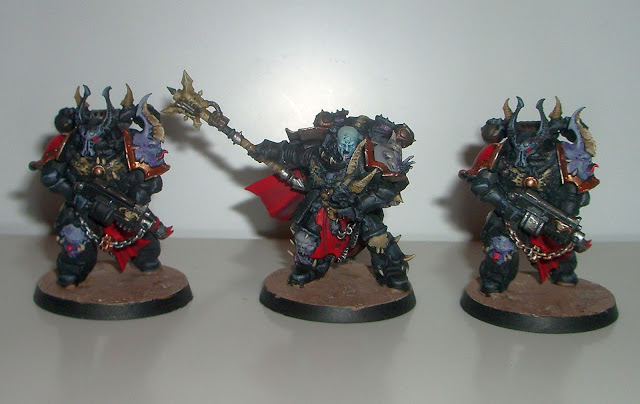 To be honest, there's potential for more detailing. I could pick away at these for quite a while more, but I think they'll be fine for the tabletop. Also, some of the detail, especially the warped knee and shoulder pads, is not very crisp and hard to make out, and I've had to make do with washes and drybrushing.

The second thing I've been working on is a chaos marine sorcerer. I thought it was worth going full-on with a conversion. Given that Tzeentch is the master of sorcerers, it seemed right to give this chap a distinctly Tzeentchian feel.

This model has the body of an old Ahriman model, and the head from a wyvern that I hacked to bits years ago. The arms came from fantasy chaos warriors, and the top of the staff came from a fantasy chaos sorcerer (who, confusingly, I had made into a genestealer magus). 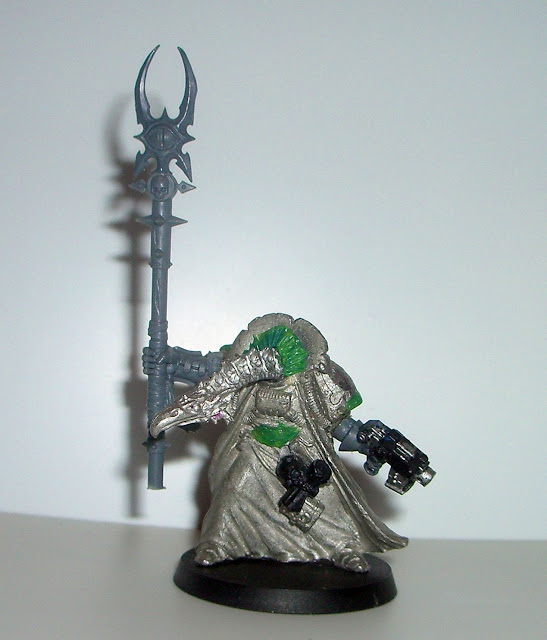 He looks rather like one of the monsters from The Dark Crystal, and might end up with a paint scheme reflecting that.

I thought I'd give him a Disc of Tzeentch to scoot about on, partly because it feels appropriate. Unfortunately, the current Chaos book doesn't allow discs or bikes for sorcerers, but it does let them have jump packs. The thing below will have to suffice. It's a leftover gun from the Mantic tank that I'm using as a Predator, turned upside-down and decorated with things from the bits box. It'll look right when I've painted it, honest. 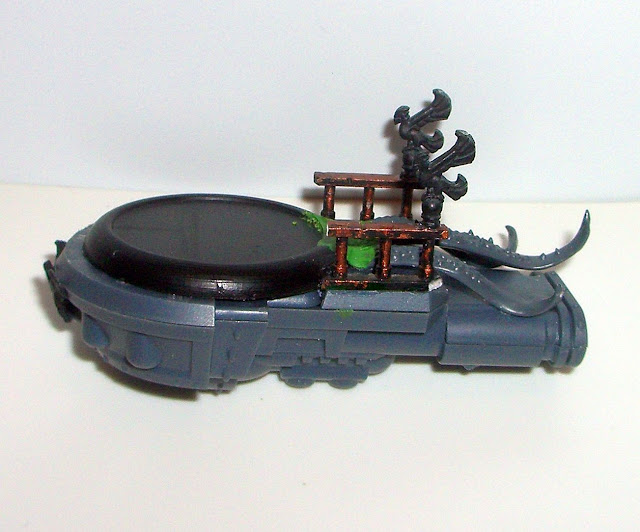