A Tank For The Chaos Marines

I had wanted to go up to Bring Out Your Lead this year, but for real-world reasons (the real world is being tediously intrusive into my magical fantasy land right now) I couldn't make it. So I did some more work on the old Chaos marines instead. Here is the next batch of five. 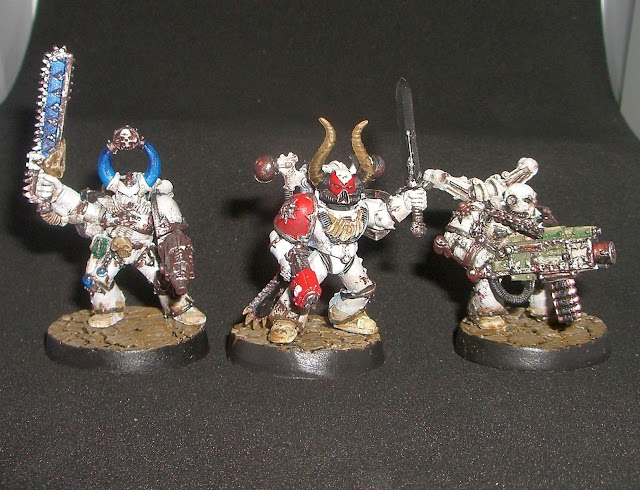 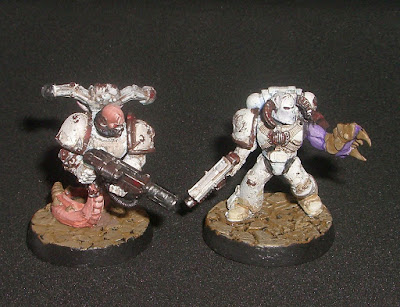 With the exception of the chap with the big blue sword, they've all been converted in some way, or have had non-regulation parts added (actually, he's got an old ork bolter, but I don't think that really "counts"). As before, the painting is "experimental" (ie ropey), but I think the touches of colour on the various models help a lot. So they're not my favourite unit, but they're interesting and they're a lot better than they were before. I've now got a squad of 10 of these unfortunates.

I've also had a go at making a tank for the Chaos people. Given that I'll have at least 20 models on foot, I thought I ought to give them a transport. The obvious choice is a chaos rhino, but they really are boring looking things. The rhino is an old kit, at least 15 years old, and it's never been an exciting design. It lacks either the sleek menace of the Aliens APC or the crude, WW1 brutality of the Leman Russ.

Added to that, it's difficult to "chaosify" a vehicle. Just sticking a load of spikes on top looks a bit naff, to my mind, and some of the conversions I've seen, while impressively wacky, are very specific in terms of which Chaos power they represent, and feel a bit too bonkers to me.

So I went with something entirely different. It's a Mantic Sturnhammer battle tank (are there non-battle tanks?) for their not-squats faction. It would usually be £30, which seems a bit steep for what you get, but I found it for £20 on ebay. 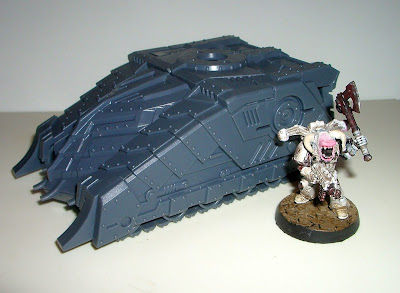 As I've found with Mantic vehicles, the detail isn't great, but it goes together very easily and wasn't a pain to assemble. Three separate turrets were included with the model - so you could assemble all three and swap them depending on what gun you wanted, unlike a GW tank. Oddly, you can't swap between the APC and the tank version, which require different rear compartments. I assembled the tank version, because it looks cooler and you never know when you'll need some big guns. 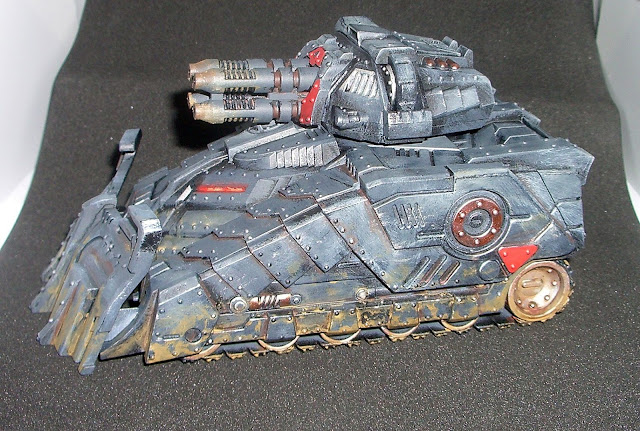 Virtually no conversion work was required. I didn't like the end of the gun barrels on the quad autocannon or whatever it is, so I cut them down a bit and drilled some holes for the barrels. Otherwise, it's as designed. I think it has a suitably aggressive profile, and looks mean enough to be transporting chaos marines, but not too over-the-top. 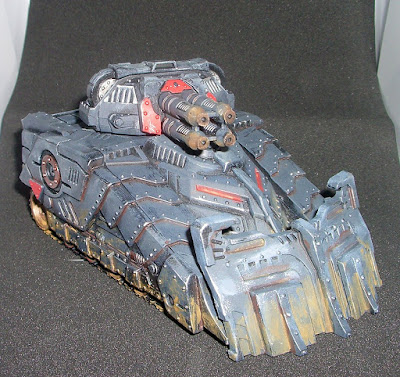 I'll just have to paint the marines who'll be using it now.
Posted by Toby at 05:55

Lovely chaos fellas, good work! I also like the tank, but I'm not sure if it fits to chaos... it does, certainly and it does not? Cannot decide. :D

Yes, I know what you mean. It looks dangerous and sinister, but not mutated or very spiky. I did wonder if it would make a good Repressor for the Sisters of Battle. I'm planning to do the next group of marines in the same colours as the tank. Hopefully that will help!