Two Wizards For The Fish-God

I've continued to paint the Carnevale models, and have got two more fish-people done for the Deep One faction. As you don't get many models in your team, I've taken quite a lot of time on these guys.

First up is Sirena, a siren/mermaid person who actually seems to be half-woman, half-octopus. She is a wizard and has a magical effect that weakens the morale of anyone around her. 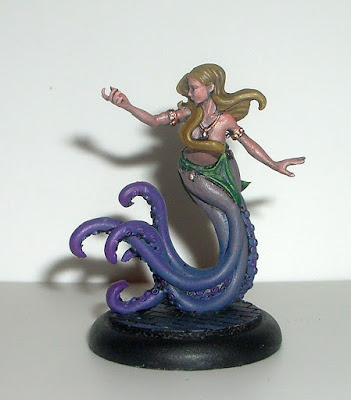 I did a lot of blending on this model while the paint was still wet. I'm pleased with the gradual transition from human skin tones to grey-purple on the tentacles. I used a Vallejo colour called Luftwaffe Uniform as the basis for the grey, mixing it in with flesh tones and purple.

The second model is a Magi-Rashaar, a wizardly chap. In the big game of Carnevale that I played a while back, he was a right nuisance to everyone, so he's probably worth having in a team. I used a similar colour scheme of dark green, grey and purple to tie him into the rest of the crew, but added some new colours to mark him out and suggest his importance. 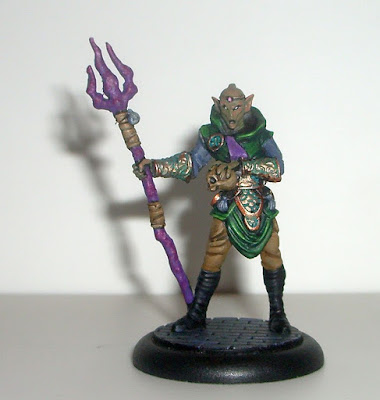 Interestingly, the skin colour - green mixed with flesh tones - hasn't come out all that well on either of my two cameras for this model. Nor does it come out well on my ork commandos, which are some of my favourite models. I think it must just not show up very well.

And here's the inevitable (?) rear view. 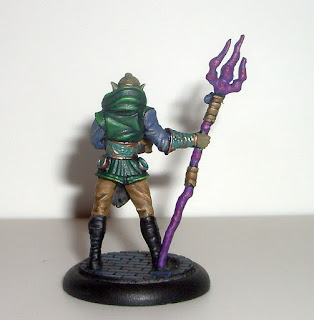 Overall, I think these are two of the best models that I've done for a long time. The Deep Ones are shaping up well (or hideously), and I've got a pair of semi-human henchmen to do next.
Posted by Toby at 02:42

Very nice. I really like your choice of colours here. :)

Thanks Skully, I wanted something low-key and amphibian, but distinctive. I'll probably paint the rival gang quite brightly, so they'll contrast well.