Avast Behind, it's the Ogre Pirates!

Everyone likes pirates. Pirates are great - unless they're Johnny Depp, in which case they're just irritating. Ogres are good too, even when they're spelled Ogors, because each one is basically a character and you only need a dozen or so for a Warhammer army.

About a year before I started this blog, I made an ogre army. They were themed as pirates, which enabled me to cut off a lot of legs and make a lot of hook hands, and included a force of aquatic trolls and a blue giant who looked like Neptune. Recently, I saw the back part of an ogre mercenary going for a few quid on ebay. I bought it, added some bits I had left over, and came up with this: 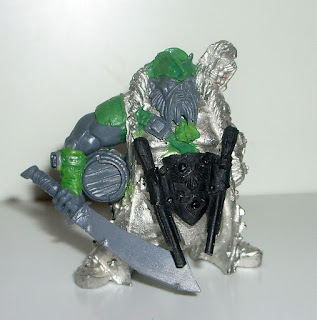 Here's the finished version, with paint. 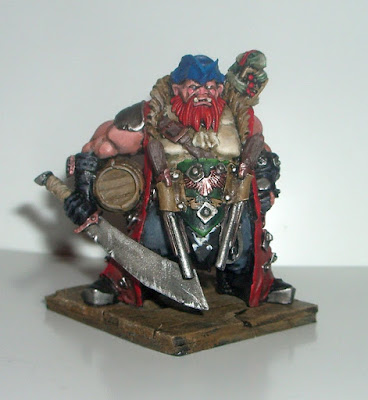 Captain Bloodbeard was one a slave in the Dark Elf city of Port Misery. He sank the ship on which he laboured by jumping up and down a lot, and then, returning to the port, proceeded to kill and eat the entire garrison. This won him an entirely undeserved reputation as a freedom fighter, and since then, he has acquired a fierce following of rogues, sea-dogs and scurvy lubbers, most of whom he hasn't tried to devour. His name is a byword for mayhem and robbery, and he is often to be seen standing at the bows of his ship - largely because he is too big to fit inside.


I also had an old metal Privateer Press model that I'd picked up cheap ages ago. It's a Mercenary Mariner warjack, and has a nice nautical look reminiscent of the Big Daddy from the computer game Bioshock. The one I had was missing a funnel, and seemed to have been slightly miscast on the side of the head. I painted it up in what I hoped were seafaring colours. It will serve with the ogre pirates, perhaps as a champion. Yo ho ho! 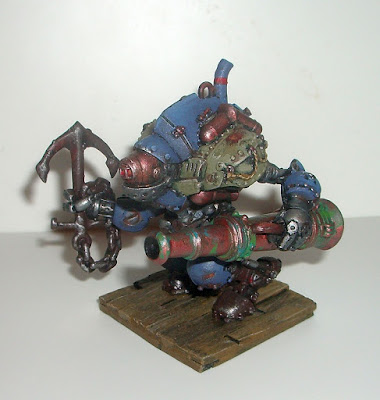 Old Barnacle is a pirate golem that fights alongside Captain Bloodbeard and his salty crew. Fashioned from old diving suits and the terrible magic of the Great Whirlpool, it frequently leads boarding actions, where its sheer weight can threaten to capsize enemy vessels. Old Barnacle carries an ancient cannon and an anchor, with which to send scurvy dogs down to sleep in Davy Jones' locker. And also to kill them. 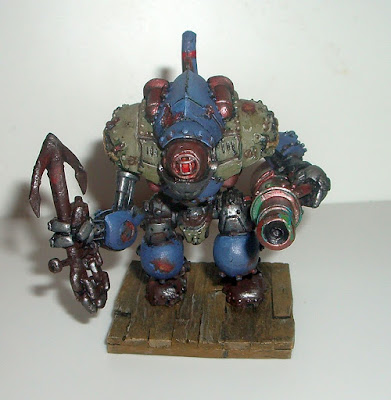 With that Ogre you have surpassed yourself, Toby. Superb sculpting and painting!

Brilliant work on the Ogre and Steampunk Jack! You've really pushed the paintjobs on both of them and I'm looking forward to more crew!

Thanks guys - that's high praise from you two! Maybe I should get the older ogre pirates out and have a go at doing them up (or making them ship-shape).