I've been working on more people for Tombstone, or perhaps the same person twice.

Tombstone includes rules for horses, enabling models to mount up and charge about as necessary in a Wild West adventure. Conveniently, Black Scorpion make a sheriff model, which comes in two forms: (i) ridin' and (ii) shy one horse. And as with all their stuff, it's really good. 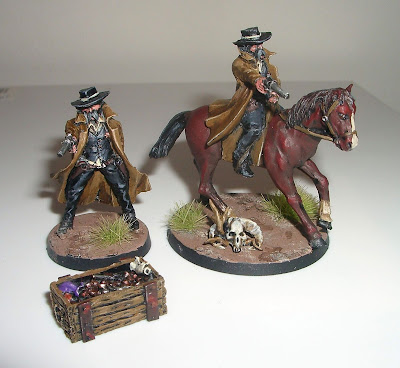 I went for a chestnut-type colour for the horse. One of the problems with the Wild West is that the range of colours is pretty small (you get shot for lookin' fancy unless you're a saloon girl). I tried mixing in red to get away from that and stop it all getting too drab.

The only thing I've done here is to add a cattle skull to the base, which was taken from an old Warhammer elf kit. It helps give the model that Death Valley feel. Also in the picture is a chest of gold and valuables, which came with the Tombstone Kickstarter. I think it looks rather nice!


Also, I started this guy. He's based on an old Necron Immortal model. I think he's some sort of renegade robot. 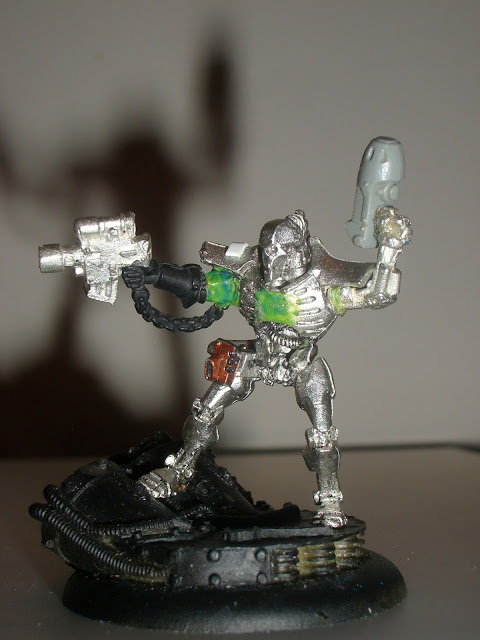 You can't go wrong with an opening scene from Sergio Leone now can you :)

The conversion is looking good. Chosen a colour scheme?

Great work Toby, I really struggle with painting horses, I think it’s where to highlight the musculature. Maybe I’ll try one for the blog post in the next few weeks

The horse is great. Can you be more specific on the paint choices you used?

Sure! It's a black undercoat with a base of P3 (Privateer Press' paints) Umbral Umber. This is a dark brown with a slight reddish tint, like a dark patina on metal. Then I added P3 Khador Red Base, which is a bright red with a slightly orange quality.

The nose and ankles were Bleached Bone worked up with Skull White. The mane and tail are just grey over black. I looked at a picture of a chestnut horse for inspiration. I think that's everything!