Mankind's first steps to the stars were helped greatly by legions of servant robots. Despite being programmed to do what they were told, for some reason the robots inevitably rose up, and it was only with a great loss of life that the humans took charge again.

Earth's leaders were keen to avoid a repeat of the carnage. Many innovative concepts were proposed, including the daring idea of not building quite so many homicidal robots in the first place. However, it was Nebula Robotics Associated, one of the leading android producers, who came up with the brilliant idea of stopping dangerous rogue robots by building a horde of even more dangerous robots to hunt them down and destroy them.

Needless to say, this went horribly wrong. Self-repairing hunter-killers like H-7 here continue to stalk the wastelands: sometimes carving up their comrades for parts, but more often turning on the humans who try to eke out a living there (their shacks are a good source of iron). More unscrupulous renegades may hire such a machine - but its obedience will never be guaranteed. 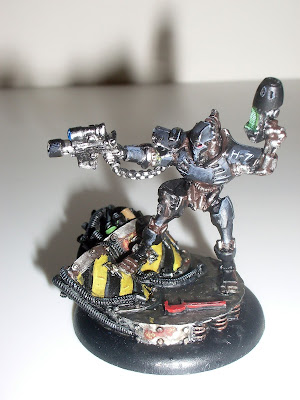 This is the painted version of the WIP model in the previous post. I bent the legs out somewhat and mounted it on a very attractive (if slightly impractical) Micro Arts scenic base. The painting was fairly simple: largely metal and grey. I find that painting Umbral Umber as a base coat for the metal parts makes them look oily and slightly used, without being decrepit. 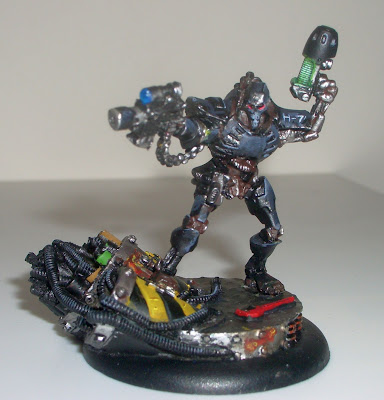 I could imagine this guy being quite a cool bounty hunter for Necromunda.
Posted by Toby at 08:19

Email ThisBlogThis!Share to TwitterShare to FacebookShare to Pinterest
Labels: Robots

The mini turned out great man, even on the mega base :P

It's only a matter of time. Half my household appliances have it in for me already.

Hey, random question: is Bring Out Your Lead worth a look? I saw some pictures from last year and it seemed interesting.

For me it is the bomb. Great tables, fantastic minis painted to a high standard....about 85% I'd say, cabinets full of Eavy Metal minis. The only reason I have only been once was due to it not being in the country that I live in. If not, I'd have gone every time. I'm planning to go back in 2019 though.

If your into oldschool gaming and that era of Citadel then I'd recommend it. If you only like the modern gaming aesthetic or tournament play then I'd give it a miss. But yeah, I love it :)

It sounds good. I'm not really a follower of any of the "movements" in Warhammer - Oldhammer, Blanchitsu and so on - but there's a lot of stuff that I like, and I do have a lot of nostalgia for some of the older models. So it sounds worth a look. Thanks for the info!