A while ago, I ordered some resin control panels from Troll Trader, a Cornish company who sell good MDF buildings and seem to own the rights to Carnivale. The panels came with two larger terminals. I painted the first terminal this week, and it's come out quite well. 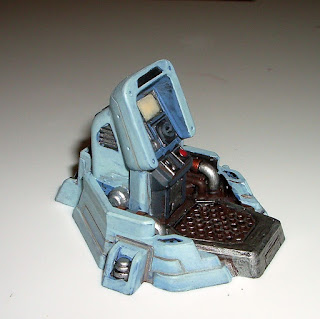 I've had some bits knocking around in the bits box (more accurately, one of several vats of bits) for ages, and I decided to combine them to make some vaguely industrial scenery. In order to stop things becoming too monochrome, I followed the lead of Fallout 4 and used bright colours, but tried to age them. 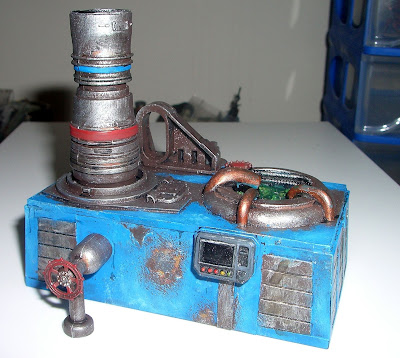 I think this thing is some sort of water purifier. It still works well, and it's been several hundred days since the last accident, unless you count people dumping the bodies of their enemies in the top. The pipes and sludge pool on the roof are a Secret Weapon base. It's a great bit of sculpting, but I've got no idea where the miniature is supposed to go on it. The control panel on the front is one of the ones that I got from Troll Trader. 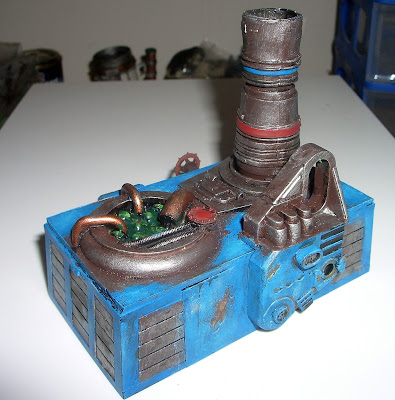 And here's a rear view. That sticky-out bit came from a zoid - goodness knows what it does, of course.
Posted by Toby at 09:43

I cleared out a fair amount of my kitbashing supplies, aka junk, a few weeks back actually. After five large garbage bin bags worth had been collected it had hardly made a dent.

Anyway, onto your stuff: That control panel looks ace Toby, really detailed and interesting terrain piece. And your kitbashing skills are mighty as well, the junk build ticks all the boxes. I'm pretty sure, looking at my Zoid Brontosaurus as I type, that that piece is probably from the shoulder joint ;)

Yeah, it does get a bit excessive at points. The trouble is that all these pieces might be junk, but you know you'll need them sooner or later, and they they'll be really useful...

Troll Trader are definitely worth a look. Of course I don't know what the postage would be like, but their stuff is pretty cheap!

The control panel looks awesome. Powder blue is a good choice as it brings with it that 1950s look.

Thanks - it was a very nice model to paint. That light blue works well for industrial stuff: it's got a good institutional feel.