Bloodletting for Fun and Profit

The forces of Chaos have had some great designs over the years, but they have also had some very wonky ones, and there's always been something of an over-abundance of big muscley men in lieu of anything genuinely sinister. The forces of Khorne have suffered from this in particular, and still do to an extent: the bloodthirster, their greater demon, has had a tendency to look like Tolkien's Balrog as drawn by a 1980s metal band (and, in one bizarre incarnation, had the head of a dog wearing a kaiser helmet).

Likewise the bloodletters, the smaller demons of Khorne. In their first incarnation (genus tadpoleus) they looked like this:

These weren't painted by me (I think they're pretty good, and you can see them HERE) but I did have a squad of four of these weird, spindly metal things. Sadly I can't find them: among the lost and the damned, they are most definitely lost.

Then the bloodletters got bulked up. They went through a late '90s phase of looking much more muscular and strangely middle-aged (a lot of models were a big ropey at that time) and then they looked like little wingless bloodthirsters for a while - savage, but too much like beastmen and not quite right somehow. More on the (un)natural history of the bloodletter can be found here: HERE

And now they've got it right. The current bloodletters have all the scrawny viciousness of the originals, but the sculpting is much better. They look three quarters medieval demon, and one quarter Giger's Alien - and not like a picture by a medieval person.

All of this preamble leads to the fact that I've painted five of them. I bulk-painted them, which is never a guarantee of the best results, but the fact that they're basically just red and the models are so nice means that they come together pretty decently. 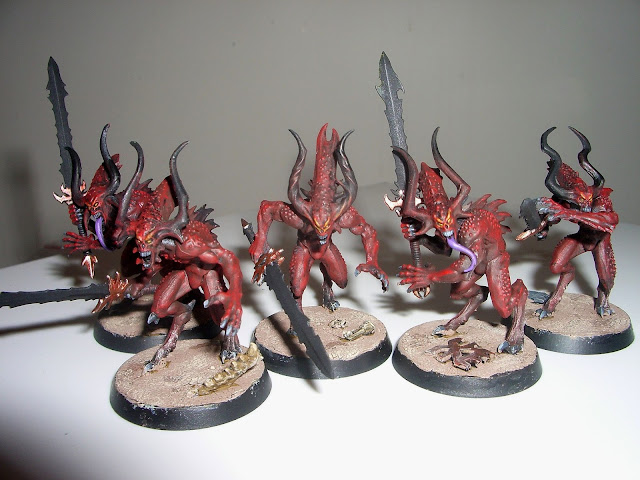 I've not converted them, apart from cutting the tongues off three of them (what is it with GW and monsters sticking their tongues out?). I haven't finished their big black swords, as I've not decided how to do them justice yet. Anyhow, I seem to be building a chaos warband now. At least it will force me to paint those Dark Vengeance marines I've had lying around for the last three years.