It's been a slow couple of weeks or, more accurately, I've actually done something other than paint models in the last fortnight. To start with, after a lot of faff and delays, my new book is on the way to being in print.

My friend James came down and we played a few games, including Shadows of Brimstone and Space Hulk. Space Hulk is a funny game. While I can admit it's technical excellence, it is so completely unforgiving that I usually feel that I've basically lost in the first few turns, if not in the actual setting-up of the pieces. I enjoy it a lot, but it always feels like a last stand rather than a winnable game. Anyhow, it's a classic in its own strange way, and extremely evocative of what it's trying to depict.

I also started work on the old metal Carnivale models that I've been stockpiling. They're fantastic but very spindly and detailed. I'm taking it quite slowly because I want to do the best that I can. Hopefully, more of that soon.

The only thing I've made recently is this. It's based on a tractor from the 40k crane set, with arms from a set of plastic blobs I got down the art shop and a face cast in green stuff from a Reaper Bones model (the same one that I used for the shoulder pad of my titan). 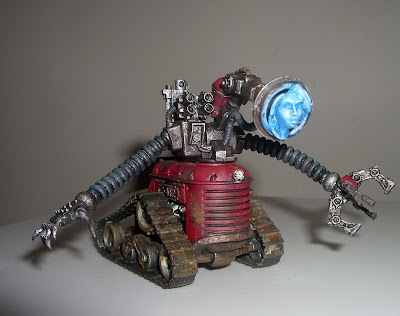 My mental image is that the machine rolls around doing tasks, and that the face is the projected hologram of the tech-priest who controls it (and whose remains may be interred within). One of those odd 40k things that happen when you start holding the bits together. I'm not sure if the face and body go together (or clash interestingly) but I like both of them. 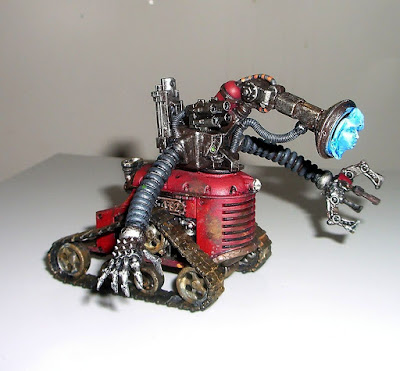 The painting isn't my best, but I wanted a rest from the detail of the Carnivale figures. I'd better get back to them while the light's still good!
Posted by Toby at 06:23

I am really looking forward to getting hold of The Pincers of Death too as I've been eagerly awaiting the latest exploits of Smith and co!

Excellent! It's really pretty exciting to be doing this writing thing again. It looks as if it will definitely be out by the 17th, although it's likely to be available before then.