The Strange Transformation of Emanuelle Porridge

Recently, my friend James and I have started playing Necromunda. Necromunda is a skirmish game set in the bowels of a vast city in the Warhammer 40,000 universe. The sides are small and the rules comparatively complex.

One of the best things about skirmish games is that you can spend a lot of time on each model, since each is effectively a character on its own and not just another faceless chap making up the numbers in a bigger unit. The capacity to arm each person uniquely and  - in my case - their suceptability to getting wounded, gives you a lot of opportunity for conversions.

For my Necromunda gang, I decided on a bunch of battered-looking wanderers. I wouldn't use a uniform, but I would have a limited palette on the models, as well as certain repeated ideas: hoods, cloaks, backpacks and practical clothing needed to scavenge in the wasteland. I was partly inspired by the look of the Vulvalini, the gang of old women from Mad Max: Fury Road.

This is the leader: 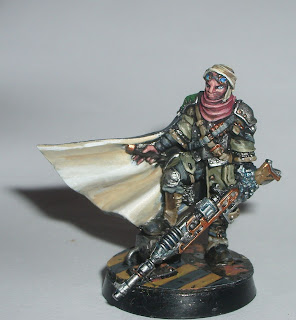 He's a converted Privateer Press model called Saxon Orrik. I replaced the gun and his left hand, and gave him a new base to stand on (he was originally resting his boot on some unfortunate monster's head!). His name is now Algebra Flaps. Silly names are going to be a reoccurring feature in this blog.

And this is his second in command. Or at least, this is what she looked like when she joined the gang. 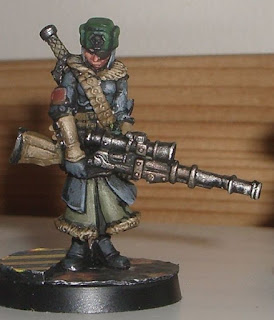 She too is a Privateer model: she's a Khardor sniper, who I haven't converted, and goes by the name of Emanuelle Porridge. In the course of her adventures, Ms. Porridge acquired the skill of Gunfighter, which enables her to fire two pistols per turn. To capitalise on this, I needed a new model.

I used the Akosha model from Mike McVey's Sedition Wars. I always thought Akosha was in a very strange position, so I removed her arms and gave her some new ones from a spare Roundhead cavalryman (as you do). 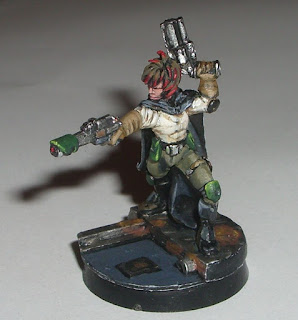 One strange hairdo and a couple of spare pistols, and there she is, in all her washed-out glory. Oddly, the laspistol came from the first conversion I ever did, when a mail-order Genestealer Magus came miscast and I had to give him a new hand.