Lo, They Behold Me Rolling

As well as the Necromunda stuff, I've been working on some Sisters of Battle. These dinky little blobs of metal are a legion of space nuns who all look rather like Joan of Arc. I like the Sisters particularly because: (a) they're one of the most ridiculous, and therefore "pure" armies of 40k, and hence they capture the spirit of it better than any of the others; (b) there's a lot of potential for conversion, especially since I don't like some of the models (mainly the ones who aren't in armour); and (c) Games Workshop obviously doesn't like the Sisters and just wishes they'd go away, which makes me feel a strange sort of sympathy for the tiny nuns.

The Sisters have few tanks, but the best is the Exorcist, a mixture of a Space Marine Rhino APC, a 1940s Katushka rocket launcher, and a pipe organ. This is my attempt at painting the official model: 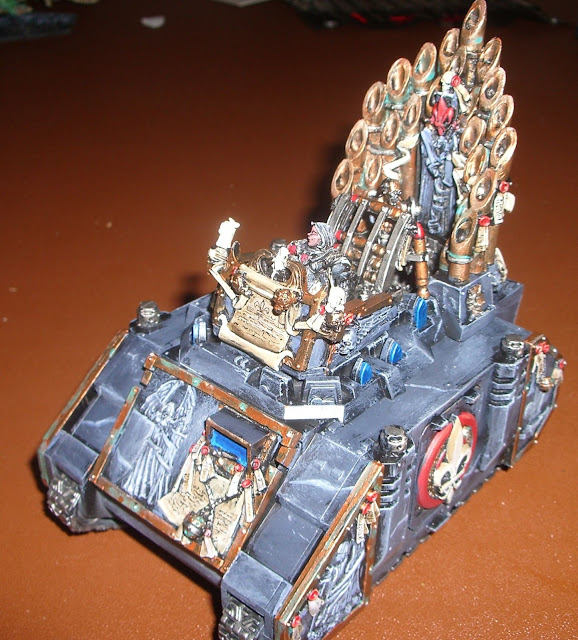 Being from an earlier generation of models, the entire superstructure and the side armour is made from lead, and the thing weighs about as much as a brick. If your opponent makes fun of your all-girl army, you can just bludgeon him to death with it.

Here is another, scratch-built, Exorcist that I made from stuff lying around. 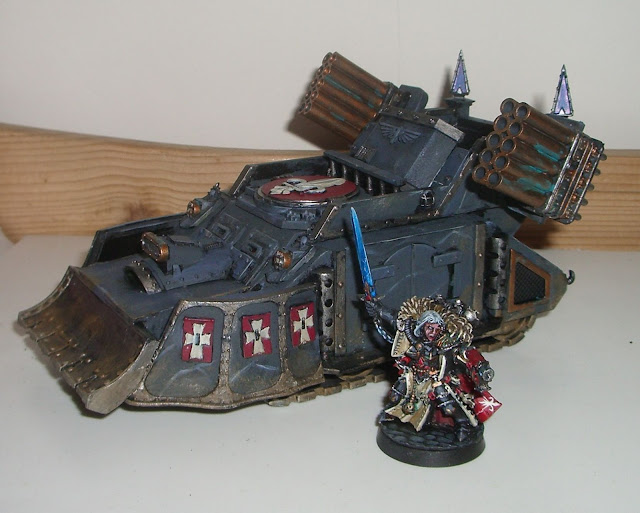 I'm pretty certain that one of these beat Dick Dastadly in the Wacky Races (it was probably called the Holy Roller, or perhaps the Carthedral). Again I've used a Rhino as the basis for the model (an older variant), and built the front forward with plasticard and parts from an Empire Steam Tank. The rear turret/pulpit/soddit-I-don't-know was made from 40k terrain kits with rockets off a Dust Tactics walker. Overall, I'm rather pleased with it, and seems to have inspired Sister Gwendoline there to wave her sword about.


The third tank I made for the Sisters of Battle was a newer Rhino with a crypt-type building from the GW Garden of Morr kit on top. The cannon was, I think, off some kind of mounted gun. The statues came from Mantic dead elves and some little Epic soldiers, who were just the right size to be reliefs of holy figures. 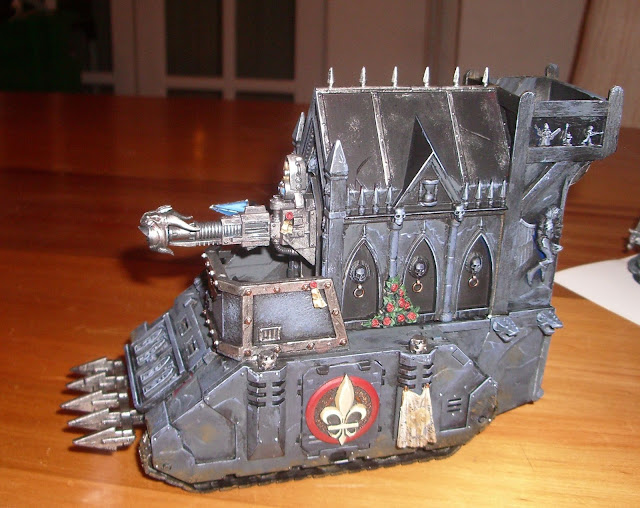 Ridiculous? Yes. But then, nobody ever played 40k because it looked sensible, did they?