Shooting Big Guns and Jumping About

Every Necromunda gang needs a heavy weapons guy (arguably). I went with the heavy stubber option, which is the cheapest, but I still have to work out the right tactics to make the hefty points cost pay off.

I built this guy out of various parts I had lying around. He's some sort of rusted and battered Terminator-type android, probably reprogrammed by the other gangers. The idea is that, as time's gone on, his disguise has fallen apart and he has been revealed as the clanky robot that he really is. 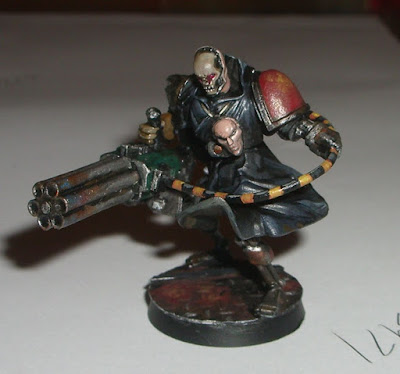 Most of the parts are Games Workshop. The head came from a Stormcast Eternal (they are useful for something, then!) and the body, gun machinery and left arm are Space Marine parts. The legs are from a Necron Warrior, and the gun barrels come from an extremely old Eldar weapon. They're lead and very heavy, so that I had to glue a metal weight on the base to stop him toppling over. His mask is a harlequin's head - I expect he'll try to fix it back on one day - and his coat comes from a Malifaux marksman. 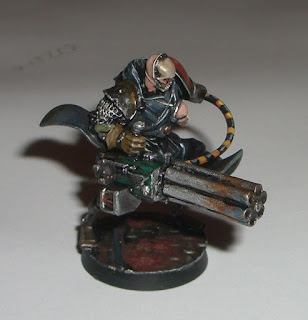 The right arm comes from a Mantic orc, I think.I have named this guy Warbastard, in honour of the remote controlled robot in the Simon Pegg show Spaced. Warbastard is probably also the title of about fifteen Motorhead albums.

And this is slightly different. It's a model from Infinity, named Cassandra Kusanagi. I thought the jumping was really cool. It looks much better in real life - but then, I would say that. 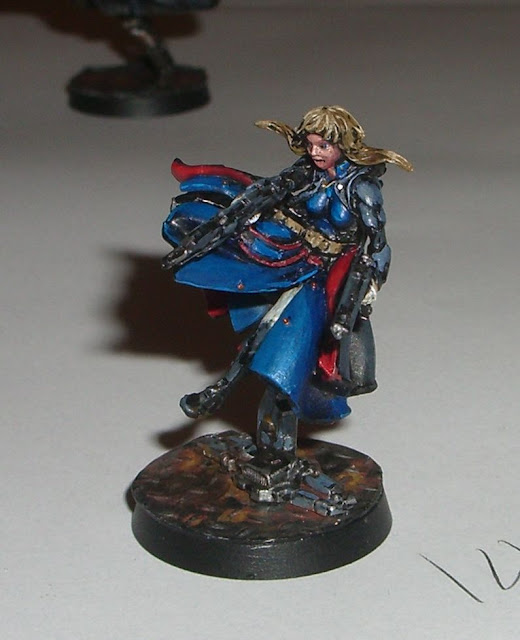