A Tau Battlesuit Takes A Fence

The Tau-repairing project (Project Blue Face, for all you UFO-enthusiasts out there) continues. This week, I've rebased and repainted another battlesuit. 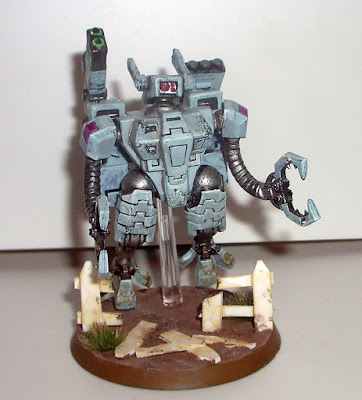 This guy has arms from an old toy that I was given ages ago (I think it was one of those Russian wargaming-for-beginners ones), for that 1950s robot look. As before, the pincers came from plastic ork runtherds. In keeping with the concept of invading small-town America, I made a white picket fence out of plasticard for him to destroy. I did want to add some farm animals running away (stealing farm animals is another popular hobby for 1950s aliens, it seems), but it made the base rather busy and obscured the battlesuit. I like the floating movement of the model. And as a bonus, I've made a... well, I'm not sure what I've made exactly. It's one of those everything-in-the-bits-box conversions. I'm not even sure which side is the front. The main body was some kind of floating heavy weapon from the Sedition Wars game, with legs off a Warlord Games Ghar model. The hatch on the top came from an old tank, and helps make it look like some sort of small flying saucer. I suppose it would function as a drone of some variety (or an epic scale H.G. Wells Martian fighting machine!). Maybe it's one of those new turret things. I just think it looks nice. 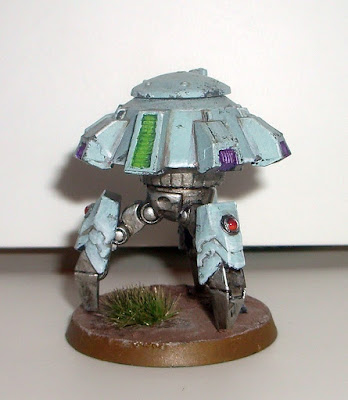 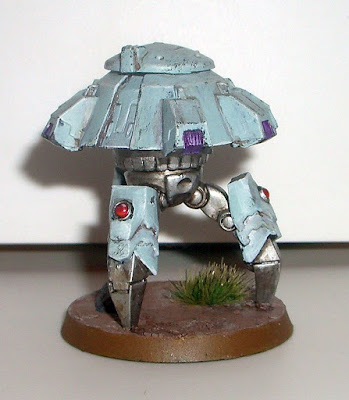 Looking at it, I remembered that I was given some little Reaper robots a very long time ago (thanks Eric!). I decided to paint them up as crew. They're sculpted in a retro style that would work equally well for steampunk or 1950s, and I think they go quite well with the saucer and the rest of the Tau. I think I'd use them as shield drones, the logic being that they help repair the battlesuits as they take damage.

And they're about the right size to ride in the UFO. 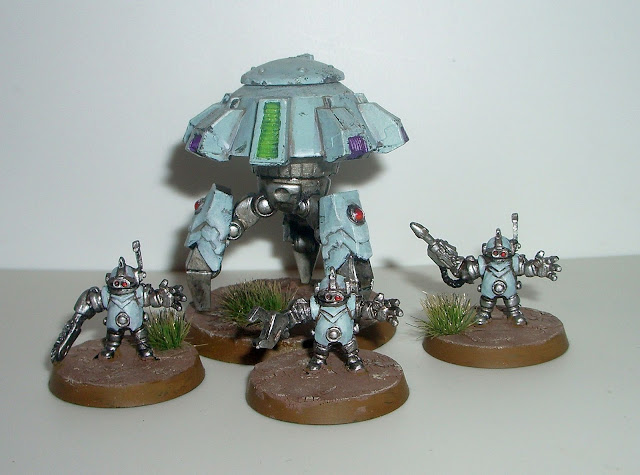 I might steal that colour scheme for my Tau, Toby! They turned out really great!

Oh, I was about to say how I liked the battlesuit and the arms, but the big drone is a show stealesr! I love it!!

I can't wait to see the whole force! Can we expect to see a battle report between the Tau alien invaders and Rednecks?

Cheers guys! I've still got some fire warriors and pathfinders to do, and a few battlesuits. I'm enjoying this project a lot.