Deep in the marshes, in the shadow of Mount Stirben, Fort Dirge rises from the dank ground like a molar in a decomposing jaw. The locals, when they speak about it at all, say that two daemons fought in the marshland in an age long past, and sank into the ground as they wrestled. They claim that Fort Dirge is twice cursed: not only is it rotting, but its seems to change shape from day to day. The grounds are impossible to map, doors open onto rooms that should not be there, and for an outsider to step inside the mansion risks them never being able to leave again.

For the inhabitants of the fortress, though, it is business as usual. The mansion tolerates them, and they are tied to it. Clovis, Count Dirge, sits in his gun room and polishes his metal leg by the firelight, dreaming of the day when he will take revenge on the swamp-dragon that bit it off. Eliza Dirge, his daughter, has retired to the vaults to work on her alchemy. In the warren of passages, the servants whisper bad news to one another: Lady Anastasia, the count's mother, has been sighted on the second floor, brooding and complaining, seemingly unable to grasp the fact that, for the last few decades, she has been dead. 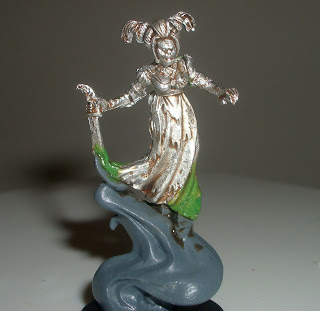 This was a West Wind vampire model put onto a High Elf wizard base. I think she'll probably be greenish white, for a proper spectral look.