My "busy and productive" week  continues. Following the Battle of the Barrels, I rolled "gunfighter" as a skill for another of my Necromunda minions, the named-at-random Burrito Discharge. Gunfighter is unusual as it's one of the few skills that I would actively want for a character in Necromunda, rather than something that might prove useful one day if I remembered about it. However, the original model had a cut-down shotgun that I made out of a crossbow and was rather pleased about. I would have to make a new model from scratch. On the other hand, it was a good excuse to make a new model from scratch.

I decided to go for a slightly more extravagant, cyberpunk look this time around. Perhaps the gang has become more flamboyant as time has gone on. For reasons that I can't exactly remember (although the words "very cheap on ebay" might have been involved) I used a Warmachine Khador Manhunter as the base for the conversion. Privateer Press has the great virtue of selling individual models, and for less than £15 each. Unfortunately, they're metal. The Warmachine model looks like this: I removed the axes, the legs and the head. The axes were replaced with a Dark Eldar pistol and a random thing from the bits box which looked both lethal and suitably home-made. The legs were swapped with a Frostgrave soldier's legs, and the left arm was repositioned and plates were added from green stuff to cover the join. I used a Mantic battle sister's head. 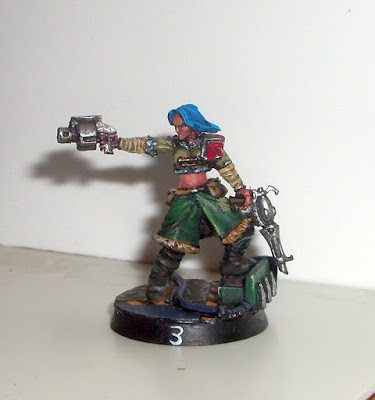 I went with a similar painting scheme as the rest of the gang, but used slightly brighter colours, especially on the hair. I'm not sure the blue hair really works, and I think the bare stomach is just a bit odd-looking. Goodness knows what those brass bits are doing on her jacket, but hey, that's space for you. She has massive boots, too, owing to the difficulty in cutting Frostgrave people off their little bases, but actually I quite like that. They look weirdly futuristic.