Necromunda might be at war, but the great companies and trading guilds still need to make a profit. Huge blimps drift through the cities and over the wastelands, advertising all kinds of dubious products. As gang war rages in the streets below, the blimps sing the praises of Soylent Sushi and a new life on an Imperial colony world (indentured service guaranteed no longer than 2 decades).

A while ago I was discussing my Necromunda scenery with my friend James. We felt that, although the terrain was good, it needed some more colour to make it more interesting. The problem is that Necromunda is set in a decaying city that at its very best is like Blade Runner when the neon signs have shorted out.

I happened to have a dwarf airship model from Titan Forge games lying around. It's a slightly fiddly resin model, in that all of the details are very detailed and it's quite hard to assemble. But it would make a perfect, if useless, piece of Necromunda terrain. What could be more dystopian than one of those blimps in Blade Runner floating overhead, advertising sushi or a better life on the off-world colonies?


So, I decided to make my own version of the blimp. The main body would come from the Titan Forge kit, with a wad of sensors on the front made out of old guns, offcuts and bits of sprue. The adverts on the sides were cut out of a free pamphlet about the game Infinity, stuck onto plasticard and "laminated" with blister pack plastic. Some of the bolts on the model were painted to look like lights (hopefully). 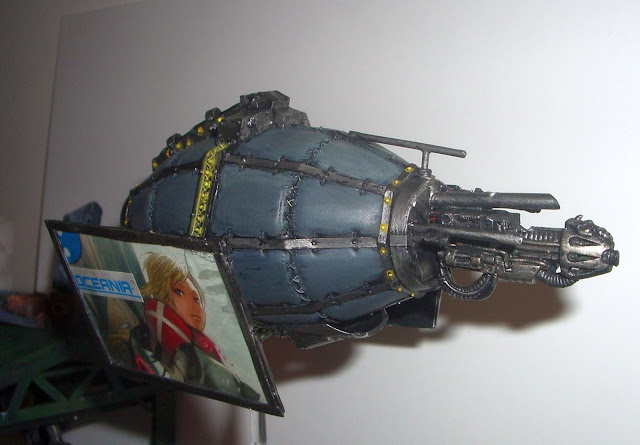 The blimp required a stand. I had a flying stand but it was much too short for the desired effect, so it needed to hover over a piece of terrain. The terrain was constructed from two pieces of GW 40k building kit (some of their best-value kits, I reckon) with a Mantic prop on one side to give it stablility. I like the contrast of the new-looking prop with the rotting masonry it's holding together. 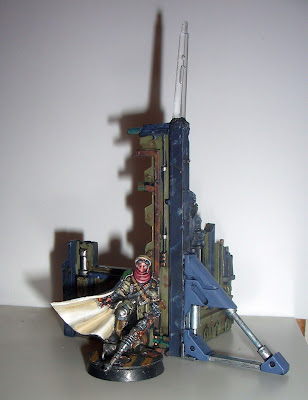 Here is the finished blimp sitting on its rather wobbly stand. I like the idea of it advertising another franchise to the people of Necromunda as an alternative place to live.

Of course, a hovering bit of terrain isn't incredibly useful, as it doesn't block line of sight much, but it is characterful. Perhaps it could move randomly. Anyone within 6 inches would have to take a leadership test or suffer a penalty to their shooting, as the shiny images distract their aim. "Come to our setting! We have girls and it's not full of chainsaw-waving monks!"

Fantastic work Toby. Where did the image come from? I hope that mine will look as good as a wrecked submarine for Deep Wars.

Could be used as a transmission tower or something? It looks too good to be relegated to just terrain duty.