After all that nostalgia, normal service is now being resumed, and we're back with our old friends the genestealer cult. It occurs to me that I've not named this cult: usually in 40k they've got absurdly sinister names involving the words "four-armed" and "cult", but I don't think Magus Elron the Litigious would really go for that. I quite like "The Brotherhood of Xenology" or "The Church of Terminal Wisdom".

Anyway, this first chap is a hybrid of some kind, armed with a shotgun. I really like the scrappy, improvised feel of the cult, and I expect that this bloke is just wearing a bit of curtain or a grubby towel to hide his very weird legs and mind-bogglingly horrible nether regions. He's based off an old metal Dark Eldar grotesque, which I got in a job lot and was missing quite a few parts. I added a gun and head from the recent genestealer neophytes box. I've used bright red as a spot colour - it looks a bit weird on a shotgun, but maybe he added it himself. 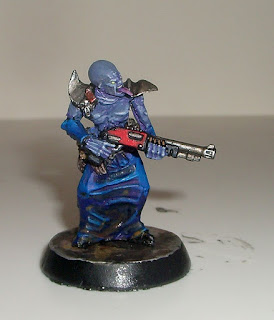 I made the next model a couple of years ago. His upper half is from a chaos cultist, and the lower part is from a plastic undead grave guard. Because the legs made the model lean over, I converted him to have his boot up on an imperial icon. I first envisaged him as a crazy preacher for the Sisters of Battle, but it looks more as if he's kicking the icon over, so a cult banner bearer seemed appropriate. 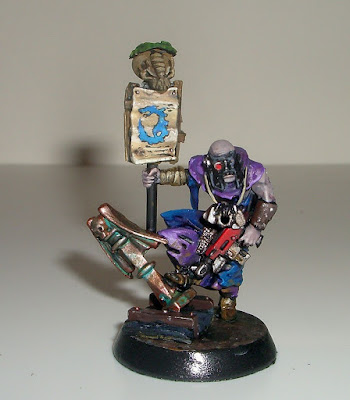 It's a sad truth about 40k (if you're me) that the most interesting models have the worst saving throws, so both of these guys would probably last about a second in the game (I nearly said "in the real world" there). Still, I only need about 998 more to have a full army now!
Posted by Toby at 05:27

Perfect for killteam though Toby. We can give it a go when you next visit castle Parkenstein.

I get Killteam confused with Murderdeath Killything, or whatever that game with all the Deathwatch people was. Have you got Killteam, then?

Those look quite unique - good job!

Thanks very much! They were a lot of fun to make!